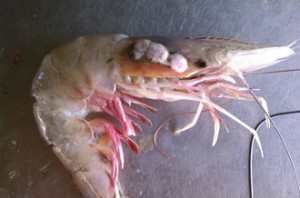 Two years after the Deepwater Horizon catastrophe in the Gulf of Mexico, BP is running ads on TV promoting tourism in the Gulf of Mexico. The ads say the seafood is great, the beaches are inviting and times have never been better down in the Gulf. But reports from people who live and fish in the Gulf aren’t so great. In fact, they’re scary. Fishermen report seeing wide-scale deformities in sea life, like shrimp without eyes, tumors on their heads, crabs with rotting shells and fish with sores on their bodies. One fisherman reported catching 400 pounds of eyeless shrimp. The harvest of brown shrimp has  decreased by two thirds and the white shrimp have been wiped out. Gulf families report that their children, who were well prior to the BP spill, now chronically suffer from diffuse illnesses, like inflamed sinuses, upset stomachs, rashes and allergies. Fishermen complain of  headaches, chronic cough, skin rashes, vomiting and diarrhea, and bleeding from ears and nose — and they have no money to pay for medical care. Some are seeking enough money from BP to enable them to leave the Gulf coast for good.