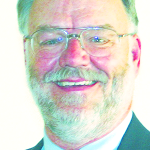 THOU SHALT NOT STEAL? – Reford Theobold, the Grand Junction City Council member and former mayor who led the $64,000 end-run around the U.S. Constitution.

Theobold runs a Grand Junction telemarketing and advertising company called TNT Productions, and was the Grand Junction Lion’s Club 2014 Lion of the Year. He was previously held in such high esteem locally that the skybox at Stocker Stadium is named after him.

Father of the $64K “Graveyard” in Front of City Hall

Until now, the thing Reford Theobold was probably best known for was for leading the City’s desperate effort to circumvent the U.S. Constitution by spending $64,000 of taxpayer money on the “Cornerstones of Law and Liberty Plaza,” known to tourists as the “Graveyard in Front of City Hall” and by locals as the “Trample on the Bill of Rights Plaza.” Theobold came up with the idea to built the pricey plaza to evade a 2001 lawsuit brought by the American Civil Liberties Union (ACLU) against the City for having a Ten Commandments tablet, a Christian religious monument, displayed on City property in front of City Hall. 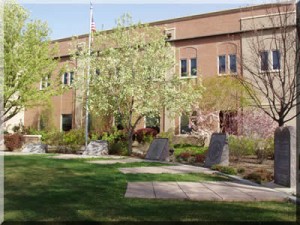 The lawsuit could have been settled quickly, easily and at no cost to taxpayers after a downtown church  offered to take the 10-Commandments tablet and display it on its own land very close to City Hall, but well off public property. Accepting this generous offer would have spared City taxpayers a fortune.

But Reford Theobold, by all accounts a devoutly religious man, would have none of it. Instead, he chose to lead the City through one of the most ridiculous and costly episodes it’s ever been through. The idea was that by planting the Ten Commandments tablet among a bunch of other secular monuments like the Mayflower Compact and Magna Carta, it would look more historical than religious.