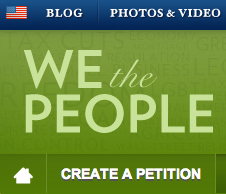 “We the people of the great state of Utah, do see that in today’s world the Federal Government has not led our citizens justly and with honor. We therefore as free men and women of our great state do believe that it is time to take matter [sic] upon ourselves to ensure our continued freedom, and to enact our own laws and here buy govern ourselves without the federal government’s involvement in our internal matters from this day forward.”

In response, someone created a petition asking the Obama Administration to strip the citizenship from, and peacefully deport each American citizen who signed a petition for any state to secede from the USA.