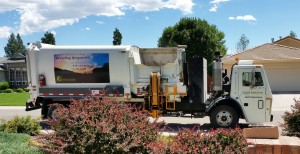 Every day in our subdivision, trucks from at least five different private garbage companies rumble through the neighborhood, hopscotching from house to house picking up trash. Most private trucks have 2-3 people operating them: one driver and one or two others who hang onto the back of the truck and jump off to gather trash cans. Sometimes just one guy does it all, driving a few feet, putting the truck in park, jumping out, emptying trash cans, jumping back in the truck, driving a few more feet, jumping out to get trash, etc.

Of all the trash services coming through the neighborhood, one is clearly the most efficient: the City of Grand Junction. A single employee does it all: drives the truck, operates an automatic lift that picks up and dumps the trash cans and puts them back down again. The City’s service is extremely quick, too. One City garbage truck services the entire neighborhood in just minutes.

The City’s rates for trash pickup can’t be beat, either. For just $10.85/month, the City provides a 64 gallon trash can and weekly pickup. Standard trash cans are just 30-45 gallons, so this is a generous size. The City also provides free junk pick up in the spring, and free fall leave removal. By contrast, private trash companies’ charge from $16-18/month for comparable service. Some charge an extra fee to provide you with trash cans and other extra fees to remove large items. Some also charge fuel surcharges when the price of diesel fuel exceeds a certain amount, so you’d have to know the going price of diesel fuel every day to know if you’re going to get a surcharge on your bill in a given month. The one advantage of private companies is that they will often pick up up to five or six trash cans for the same monthly or quarterly price.

From an efficiency standpoint, though, if the City were to service every house in the neighborhood, we’d have far fewer big, diesel garbage trucks rumbling through burning diesel, spewing exhaust, and duplicating the very same route emptying trash. It would be far quieter, make better use of energy resources, generate less air pollution and be a far more efficient use of workers’ time.

But because of the necessity of private enterprise, we have the current, inefficient system of multiple garbage companies all duplicating the same service, covering the same places over and over, wasting gas and creating noise and air pollution unnecessarily.