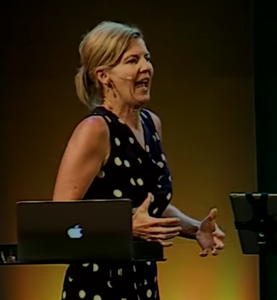 June Fellhauer is back, once again taking advantage of School District 51’s “PeachJar” literature distribution system to plug her $99 video evangelism series to girls 11 years and up.

Several days ago Fellhauer sent out a flier to D-51 families promoting another free sales-pitch event, this one called “Becoming Love,” aimed at girls 11 and up. The purpose of the event is to recruit kids’ families to pony up $99 for their daughters to view Fellhauer’s online, four-week video series in which she teaches biblical myths to girls with the primary message that women are subservient to men rather than qualified, able individuals in their own right. Fellhauer warns girls not strike out on their own, and tells girls if they remain helpers underneath the “cover” of their men, the men will “lift them up,” and they will get their power that way.

This year, District 51 has added an extensive disclaimer at the bottom of Fellhauer’s flier that reads:

This event is not sponsored by or endorsed by District 51 and the District assumes no responsibility for the conduct or safety during the event. In consideration for the privilege to distribute this information/hold this event, the organization shall defend, indemnify and hold District 51 harmless from any and all claims, injuries, damages, losses or suites, including attorney fees, arising out of or in connection with this event, except for injuries and damages caused by the sole negligence of the district.

Last year, part of Fellhauer’s message included shaming girls about their use of social media, while at the same time she herself was promoting her “ministry” using social media sites like Facebook, YouTube and LinkedIn. Fellahuer is still using social media herself, but to her credit, seems to have dropped the message of shaming other people for using it. 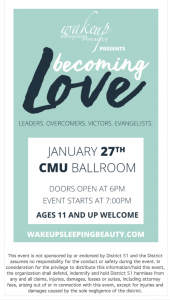 The flier distributed for this year’s religious event for girls. The event is used to pitch a $99 online video series of Fellhauer teaching girls to be subservient to men

You may remember back in January of 2016, when District 51 sent out a flier promoting Fellhauer’s show for girls at CMU called “Sleeping Beauty, Worship at His Feet,” basically a Christian Bible study program with herself as the messenger. Fellahauer promoted her program using District 51’s PeachJar system then. The American Civil Liberties Union, which at the time had just filed a new field organizer for the western slope, investigated by filing an Open Records Act request seeking documents pertaining to distribution of the electronic flier. They discovered Fellhauer had been allowed to use the PeachJar system for free, while everyone else had to pay to use the system.

Fellahuer: “Girls, Stay Under Your Husbands”

“The husband is the head of the wife,” she says.

Toward the end of her talk she says, “We let the women’s lib movement come in and say ‘we are woman hear me roar’ and ‘we will rise on our own,’ but God says ‘That’s not how it works.'” She tells girls. “Women, if you will get under men, get under headship…men will raise you up.” Fellhauer says women must “stay under men’s covering” and that if they don’t, “it will be horrendous what we’ll have to go through … But if we just stay under our covering, stay under our husbands, encourage, edify, build [them] up…I guarantee you you will come into power along with your husband and you will be the envy of everyone on your block.”

We have yet to find out if Fellhauer got to use D-51’s PeachJar literature distribution system free again this year, or if she had to pay like others who seek to use it.