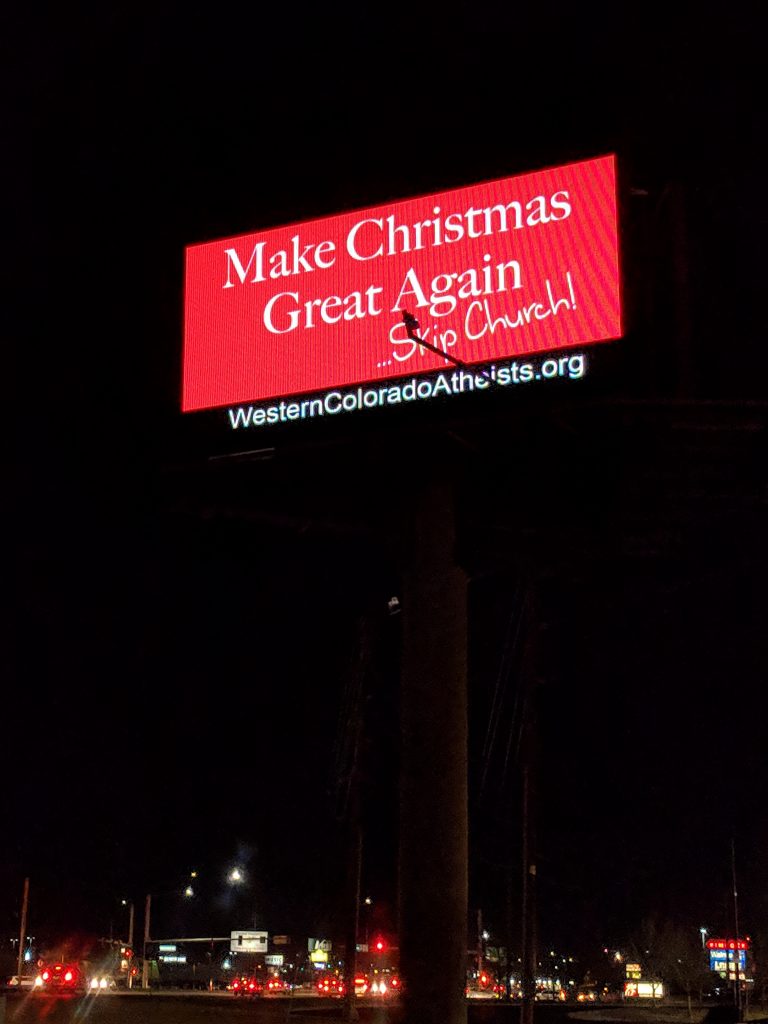 WCAF’s 2018 winter billboard in Grand Junction, up now in front of Hobby Lobby on I-70 business loop (on the board facing west).

The non-profit group Western Colorado Atheists and Freethinkers (WCAF) has a digital billboard up on I-70 Business Loop in front of Hobby Lobby and Chick-Fil-A for Christmas that says “Make Christmas great again. Skip church!”

The sign is a reminder that the holiday focus should be more on kindness, humanity and ethical treatment of others than on organized religion, which has been proving problematic lately, and to a horrific degree.

The sign went up on December 19, coincidentally on the same day a New York Times story revealed the Catholic Church in Illinois withheld the names of at least 500 priests accused of sexual abuse of minors.  A Pennsylvania grand jury issued another devastating report last August that described over 1,000 cases of sexual abuse perpetrated by 300 priests over a span of 50 years in Pennsylvania alone, and reporting that the bishops covered up the crimes. These two reports covered only the Catholic Church is Illinois and Pennsylvania, but sexual abuse has also been exposed in the Jehovah’s Witnesses and other religions. Federal prosecutors are considering charging the Catholic Church under organized crime statutes like the Racketeer Influenced and Corrupt Organizations (RICO) Act, which are used to prosecute organized criminal groups like the Mafia.

The billboard is also a reminder that the western slope’s population is no longer monolithic in it’s religious beliefs, and that a growing segment of Mesa County residents are not just secular, but proud of it too.

The sign will be up through December 25, so get photos of it now before it’s gone.

To donate to Western Colorado Atheists and Freethinkers go here.