Parler is a social media platform for extremists that was banned by Amazon, Apple, Google and other services after it was deemed a source of radicalization for far right-wing extremists and an organizing place for violent, far-right domestic terrorist groups .

The phrases DHS used about “citing misinformation and conspiracy theories about Covid-19” and “perceived grievances fueled by false narratives” point directly to far right wing extremist ideology, including the Big Lie that Donald Trump actually won the November 3 election “in a landslide” but for massive voter fraud.

No such fraud has ever been proven, and Biden was declared the clear winner of the Nov. 3 election. 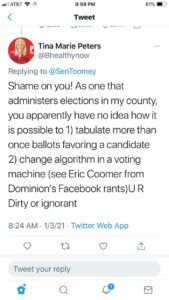 Western slope Republicans have lied to the public, contributed to the right wing domestic terrorism ideology that is currently threatening the country and efforts by far right-wing efforts to destroy our democracy.