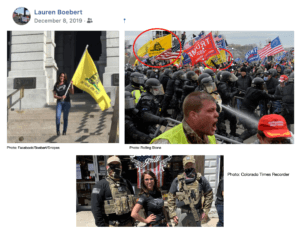 Lauren Boebert, shown at upper left in a 2019 Facebook post, holding the same flag flown by right wing extremists who stormed the U.S. Capitol on January 6, 2021

The New York Times is reporting that the State of Colorado will investigate allegations of campaign finance fraud by CO House Rep. Lauren Boebert involving her excessive 2020 mileage reimbursements and subsequent payoff of multiple outstanding tax liens on her restaurant, Shooters Grill, in Rifle, CO.

In 2020, then-candidate Rep. Boebert reimbursed herself from her campaign fund for over $30,000 worth of mileage that she claimed to have traveled between April and November of 2020, during the pandemic, and then appeared to have used the funds to pay off tax liens against her Rifle, CO restaurant. The number of miles she claims to have driven was enough to circumnavigate the globe 1.5 times.

For contrast, Boebert’s predecessor in the House, Scott Tipton, reimbursed himself for a total travel expense of only $12,255 from his campaign over the entire ten years he held that office.

A complaint to the Federal Election Commission about the matter was dismissed after the Commission reached a 3-3 tie vote on whether to pursue it.

But American Muckrakers PAC, the same group that successfully helped oust controversial North Carolina House Rep. Madison Cawthorn in that state’s primary, has revived the issue by filing a formal complaint about it to the office of the Colorado Attorney General.

The AG’s office said it will work with the Colorado Department of Revenue and Department of Labor and Employment to investigate whether Boebert did in fact fraudulently obtain campaign funds to help pay her way out of the liens.

If true, the payments would follow a similar incident from 2021 in which Boebert used funds from her campaign coffers to pay for the rent on her restaurant.

American Muckrakers PAC has created the website FireBoebert.com, a Twitter account @FireBoebert.com, an email account tips@fireboebert.com and a tipline (970) 610-6001 for people to convey information about Boebert that could be helpful in ousting her from the CD-3 Congressional seat.