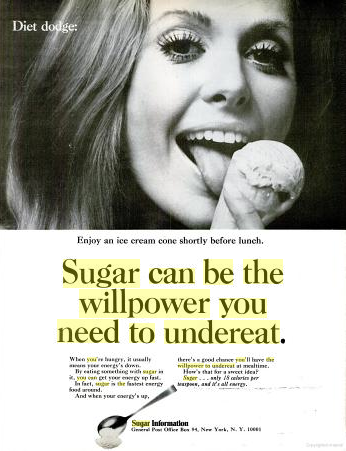 The November/December issue of Mother Jones magazine has an explosive new analysis of more than 1,500 pages of internal documents from the archives of now-defunct sugar companies that reveals that for 40 years, the sugar industry engaged in a massive PR campaign to sow doubt about studies linking sugar consumption to disease.  After a growing body of independent research started implicating sugar as a significant cause of heart disease, tooth decay, diabetes and other diseases, the sugar industry responded by developing a PR scheme that included secretly funding scientists to perform studies exonerating sugar as a source of disease. The sugar industry also secretly created a front group, the Food and Nutrition Advisory Council, that they stocked with physicians and dentists who were willing to defend sugar’s purported place in a healthy diet.  Sugar companies also worked to shift the conversation about diabetes away from sugar and boost the notion that dietary fats, especially saturated fats, were a bigger culprit in causing heart disease than sugar.