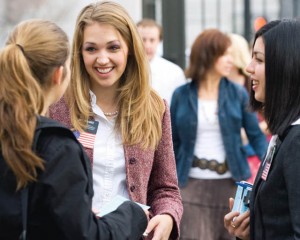 Mormon women are taught to dress modestly: shoulders must be covered, dresses/skirts must reach the knees, and only one set of earrings at a time is permitted (“positioned in the usual place on the ears”)

A group of devout Mormon women are encouraging other Mormon women to engage in a radical act on Sunday, December 16, 2012: wearing pants to church. A movement of faithful female Mormons have organized a feminist group within the church called “All Enlisted” which has decleared December 16 “Wear Pants to Church Day” as a way to openly challenge a host of gender inequalities within the Mormon church. Event organizer Stephanie Lauritzen describes some of the inequities women face within the Latter Day Saints (LDS) church: men’s voices are more prominent than women’s  in meetings, leadership positions and decision-making bodies; many prominent positions besides the priesthood — like school presidencies and mission leaders — are given only to men; women can occasionally do the same work as men, but are given different, more demeaning titles (like “Sister” vs. “President”), and only men are allowed to handle church finances. Lauritzen points out that women’s primary value within the church is linked to being a wife and mother instead of being a “child of God.” A fuller list of Mormon gender inequalities can be seen here.

END_OF_DOCUMENT_TOKEN_TO_BE_REPLACED 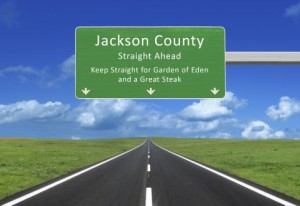 Americans may be on the brink of electing Mitt Romney as their first Mormon president, but so far, Romney has refused to talk about his faith, preferring to leave people in the dark about it. Judging by the popularity of our recent blog about Romney’s Mormon underwear, though, Americans seem to be eager for more information about Mormon beliefs and practices. So what DO Mormons believe? Mr. Romney may not tell you, but we will. To get you started, here are a few Mormon beliefs Mr. Romney might prefer you didn’t know:

2) Mormons believe God has his own planet, called Kolob.  Kolob has its own time. One revolution of Kolob takes one thousand years.

3) The Mormon church bans women from  the priesthood.

4) Mormons baptize dead people. The Church of Jesus Christ of Latter Day Saints (the Mormon Church) explains this by saying “The validity of a baptism for the dead depends on the deceased person accepting it and choosing to follow the Savior while residing in the spirit world.” Some famous dead people Mormons have baptized include Anne Frank, Hitler, Lady Diana, Mohandas Ghandi, Pope John Paul II and Barack Obama’s mother, Ann Dunham.

5) Mormons believe that before Armageddon (which, remember, must occur before the second coming of Christ) two countries called “Gog” and “Magog” will battle each other ferciously over the country of Israel. One will be for Israel and the other against it. Mormons believe that God will descend to break up the fight and that afterwards “beasts and fowls” will “eat the flesh and drink the blood of the fallen ones.” Christ will come again after the battle.

6) Black people were banned from the Mormon priesthood until the LDS church reversed that doctrine (pdf) in 1978. 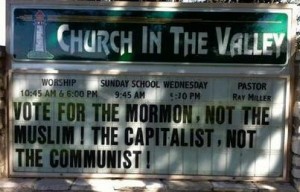 Americans United for Separation of Church and State (AU) has asked the Internal Revenue Service (pdf) to investigate a Texas church after the pastor posted a message on the church’s marquee urging people to “VOTE FOR THE MORMON, NOT THE MUSLIM!  The “Mormon” reference is to Republican presidential candidate Mitt Romney, who belongs to the Church of Jesus Christ of Latter-day Saints, also known as the Mormon Church. ABC News reported that the sign is an obvious reference to President Barack Obama, whom many conservatives believe is a “secret Muslim” even though President Obama says he is a Christian and attends church with his family. According to ABC News, Ray Miller, the pastor of the Church of the Valley in Leakey, Texas, said he put the sign up because “he feels strongly about the election.” The church sign violates U.S. law, however, which prohibits tax-exempt organizations, including all churches, from endorsing political candidates.