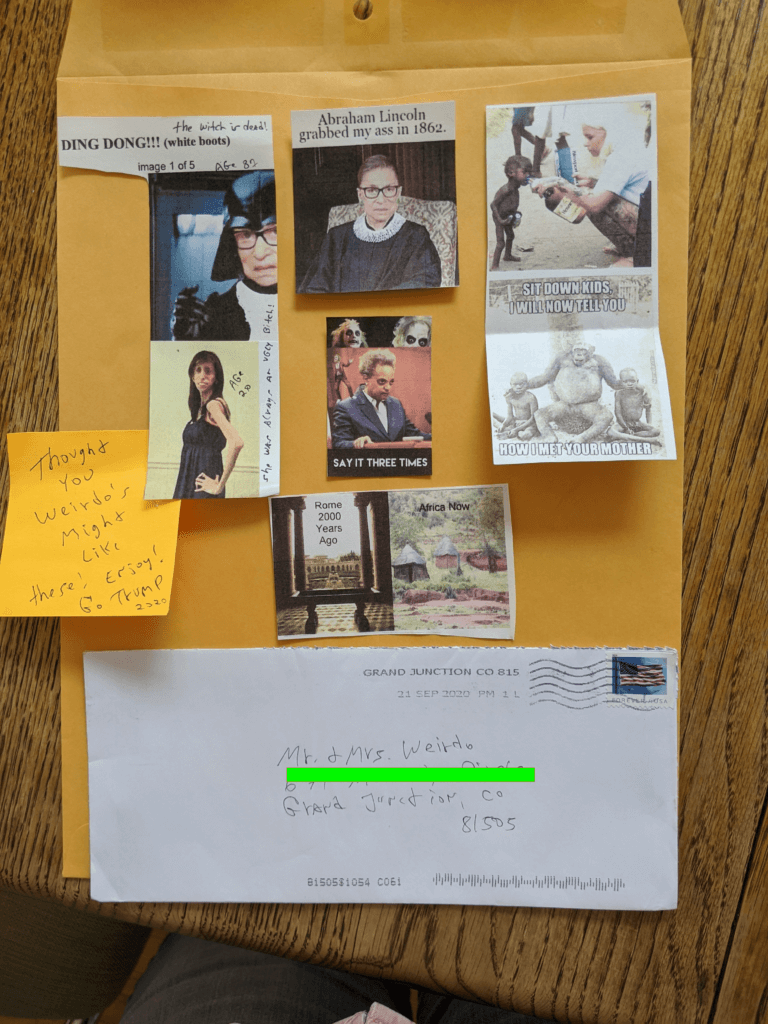 Some of the 30-40 racist, sexist and homophobic memes and cartoons sent anonymously to the author in the mail this week

9News journalist Chris Vanderveen today published an investigative news story about the beleaguered Grand Junction woman who has endured eleven years of invasive personal attacks as a result of serving on the jury that convicted Michael Blagg of murder in 2004. The piece focuses on Mesa County District Attorney Pete Hautzinger, who is now piling on to the former juror’s woes by pursuing legal charges and fines against her. Vanderveen’s efforts bring the story of the Grand Junction juror’s plight to Colorado’s front range.

The piece is titled “Juror gets sued after murder conviction.”

Marilyn Charlesworth first endured ten years of attacks by Blagg’s defense attorneys, who, in repeated efforts to win Blagg a new trial, first accused her of failing to disclose a vision impairment, then of failing to disclose a prescription for a certain medication, and now finally accusing her of lying about whether or not she believed she had experienced an incident of domestic abuse over twenty years ago. Now Mesa County District Attorney Pete Hautzinger is joining Blagg’s defense in attacking against Charlesworth by charging her with contempt and threatening her with jail time, fees and fines in excess of $50,000, purportedly to pay for costs of Blagg’s first trial, like hotels and meals for expert witnesses.

Hautzinger’s legal pursuit of Charlesworth is forcing her and her husband to spend their retirement savings on legal fees, and could bankrupt the couple. The stress Charlesworth has been under has recently caused her eyesight to deteriorate further to the point where she can no longer drive or work. The Grand Junction Daily Sentinel’s many negative articles editorials about her has turned her into a pariah locally, to the extent that she rarely leaves her house.

Why so harsh on Charlesworth? Misogyny? Politics? Smokescreen?

Hautzinger’s over-the-top pursuit of Charlesworth is raising questions locally of whether this is a possible case of misogyny, since he recently let a male juror in another case who was accused of exactly the same offense walk free with no consequences. Others think Hautzinger is disproportionately attacking Charlesworth to divert attention from former Mesa County Sheriff investigator Steve King, who was the lead investigator for Blagg’s 2004 trial. King recently pled guilty to embezzling, and a result can no longer offer credible testimony in a new Blagg trial. King is also a former State Senator and favorite of the Mesa County Republican Party, which has suffered a number of embarrassing incidents of corruption and candidates who have broken the law in recent years. Charlesworth has in the past also been an outspoken critic of longstanding Mesa County Republican institutions, like the GOP-dominated Grand Junction Area Chamber of Commerce. Hautzinger is a Republican, so his actions could also potentially be political payback.

KUSA 9News reporter Chris Vanderveen won the Edward R. Murrow journalism award in 2011, and the National Press Photographers Association (NPPA) Reporter of the Year Award in 2012. He and a camera operator drove out to Grand Junction from the front range and back in a single day to cover Charlesworth’s story.

Charlesworth wants to publicize her experience so citizens are aware of the dangers they face if they agree to sit on a jury, since there are no limitations on how long or intensively defense attorneys can try to get new trials for their clients by pursuing jurors who return verdicts they don’t like.

Ohio State Senator Nina Turner has introduced a bill that would require men seeking prescription drugs for the treatment of erectile dysfunction to submit to a mental and physical exams to assure they have appropriate medical reasons for obtaining the drug, and they would also have to get tested for HIV. Rep. Turner says the legislature should show the same concern about men’s reproductive health as they do women’s reproductive health. The bill is part of a growing national backlash against a wave of Republican-enacted bills that restrict women’s access to reproductive health care, including safe and legal abortions. Other female legislators across the U.S. have introduced bills that focus on men’s reproductive systems, too. Oklahoma Senator Constance Johnson introduced an amendment to the state’s “Personhood” bill that would make it illegal for men to ejaculate outside of a woman’s vagina, saying such an act “shall be interpreted and construed as an action against an unborn child.” Illinois House Representative Kelly Cassidy introduced an amendment to a forced ultrasound bill that would order men to watch a graphic video depicting Viagra’s side effects before they could obtain a prescription for the drug. A bill filed by Virginia State Senator Janet Howell would require men to submit to rectal exams before getting a Viagra prescription. In Georgia, a state representative introduced a bill sharply limiting men’s ability to get a vasectomy.