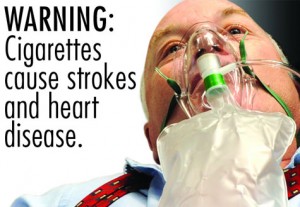 Tobacco companies knew in 1953 that cigarettes caused cancer, but have long fought the inclusion of health warning labels on cigarettes, including this updated one.

This three-page document dated November 15, 2001, from Philip Morris’ online corporate document collection, argues that the federal government would be better off diverting funds from the U.S. Department of Justice’s 1999 lawsuit against the tobacco industry to concentrate on the fight against terrorism.  The strategy leverages the September 11, 2001 terrorist attacks on the U.S. as a reason to stop the government’s investigation into the major American tobacco companies’ decades-long conspiracy to defraud the American people about the links between smoking and disease.  On November 29, 2001 (just days after this document was written) the investigative organization Center for Public Integrity revealed that then-House Majority Whip and tobacco industry ally Tom DeLay (R-Texas) had done the bidding of the tobacco companies by quietly inserting a clause into the Financial Anti-Terrorism Act of 2001 (a bill rushed through Congress in the wake of the Sept. 11 attacks) shielding U.S. tobacco companies from foreign lawsuits that alleged cigarette smuggling and money laundering. At the time, Canada, the European Union, the governors of Colombia, and other Latin American countries had filed suits against Philip Morris, R.J.Reynolds and British American Tobacco under civil RICO laws in U.S. federal and state courts. Democrats objected to clause (which was inserted on the evening before the vote on the bill), and it was removed.  The Center for Public Integrity’s article about efforts under the Bush administration to use the terrorism issue to shield the American tobacco companies from lawsuits by foreign countries is available here. (See the section titled “Case Study #2: Corporate Effort to Shape Policy Through 527s.”) The strategy document was found in the papers of Mark Berlind, Philip Morris’ in-house counsel, and the man credited with being the mastermind behind PM’s Regulatory Strategy Project, a corporate plan to enact FDA tobacco regulation on PM’s own terms.