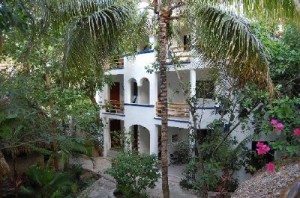 The owners of the Luna Blue Hotel on Mexico’s Caribbean coast reveal their experience with Expedia’s strong-arm tactics to try and ruin their business and push travelers to book at more bigger, more lucrative properties that have a more favorable relationship with the site.

Years ago, Tony and Cheri quit their jobs, left their lives in the U.S. and risked their entire life savings to pursue their dream of operating a small hotel on Mexico’s Caribbean coast. Their quaint, 18-room place, the Luna Blue Hotel, took some hits from the swine flu scare and state-side reports of central Mexico’s drug wars, but the couple vowed to hold on and get through it somehow. During that lean time, a representative of the powerhouse travel website Expedia approached the couple and offered to help them recover some of their lost business by listing their place on Expedia. The couple agreed it might be a good idea to list with the site, and signed on as an Expedia “partner.”

Expedia, an internet travel behemoth that also owns Hotels.com, TripAdvisor, Hotwire.com and similar prominent Chinese and European travel sites, charged a whopping 25% of every booking made through their sites — a fact Tony and Cheri were forbidden to reveal to guests. But far worse than that was how Expedia treated the couple and started working to crush their business.  Expedia failed to use the description the couple had supplied about their place in the website’s online profile of the Luna Blue Hotel.  The room descriptions posted on Expedia were completely wrong, and the couple’s efforts to get Expedia to correct them were ignored. Guests who booked at the Luna Blue Hotel through Expedia were upset the rooms weren’t as described. Their hotel’s reputation suffered, but still Expedia failed to address the couple’s pleas to fix the problems. Then Tony and Cheri noticed that bookings through Expedia had stopped completely. The couple found that the links to their hotel on Expedia were broken and their listing had completely disappeared from the site. Again, they got no response to desperate phone calls and emails to Expedia asking them to fix the problem. Just when they thought things couldn’t get worse, Tony and Cheri found that without their knowledge or consent, the Expedia had cancelled ALL of their existing Expedia reservations, including ones people had made months before, and told the guests that their reservations had been cancelled because the Luna Blue Hotel had no available rooms — an outright lie. Then Expedia set the Luna Blue Hotel’s page on their website to show the hotel never had any availability at any time.

None of this was a mistake. It was a deliberate effort by Expedia to crush independent hoteliers and push business to their more lucrative partners. Tony and Cheri discovered they weren’t the only ones hit with these tactics.  In 2011, a French court slapped Expedia with a huge fine to punish the company for using this same fraudulent tactics of telling visitors to their website that small hotels have no availability  pushing them into booking with more expensive properties instead. The French lawsuit also alleged that Expedia used TripAdvisor reviews to push traffic to Expedia and Hotels.com instead of to the hotels’ own websites. Other tricks Expedia used included displaying a hotel as “full on requested dates” when in fact rooms were available, and suggesting other nearby properties that had better commercial terms with Expedia. Tony and Cheri revealed Expedia’s fraudulent behavior in early December on their hotel blog. The couple doesn’t have the money to sue Expedia, but wants to get the word out about how the company is working to crush independent hotel operators.