If you’ve ever been to a Grand Junction City Council meeting, you’ve seen the religious pageantry that starts many of their meetings: First the mayor calls the meeting to order, then tells everyone to stand for the Pledge of Allegiance and remain standing for the invocation (prayers). Almost invariably, the prayers are in the name of “Jesus Christ,” effectively turning the public meeting into a Christian church service as members of the audience and Council obediently bow their heads, clasp their hands and mumble “Amen” at the end.

Do we really need to spend crucial time summoning a supernatural being to a City Council meeting?

But City Hall is not a church. It’s a taxpayer-funded public building and the entire public is invited to attend meetings there, not just Christians. Under these circumstances, such religious displays are awkward and out of place at best, divisive and prejudicial at worst, for the overt favoritism Council shows to those who belong to the Christian religion.

If you have to attend a City Council meeting and don’t want to be subjected to the sectarian prayers, you’re out of luck. City Council has settled the matter, they believe, by telling the public you can just “leave the room” if you don’t like it.

Nice way to welcome a diverse citizenry to City Hall.

Council has clearly gotten the message by now that their sectarian prayers alienate some City residents, but they apparently just don’t care.

Council has been overt about its preference for Christianity for years. The Ten Commandments tablet on City Hall’s front lawn is evidence of this.

In 2001, a group of citizens asked Council to remove the tablet, saying it was an inappropriate endorsement of religion on public property and violated the separation of church and state guaranteed in the U.S. Constitution. The ACLU even sued the City over it, making the message even clearer. Despite this, Council went to great lengths, contortions and expense to assure the tablet stayed put firmly on City Hall’s lawn. The only religion represented in the display on the City’s front lawn is Christianity. There are no monuments to Judaism, Buddhism, Islam or any other religion.

So much for respecting religious diversity back in 2001. 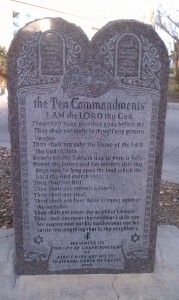 Grand Junction’s Ten Commandments tablet, donated to the City in 1959 by the Fraternal Order of Eagles, which only admits people as members if they profess a belief in God. Council has acted to keep the tablet on City Hall property at all costs.

A protest of the City’s endorsement of Christianity occurred again in May, 2009, when Western Colorado Atheists and Freethinkers formally asked City Council to stop hosting prayers to “Jesus Christ” at their regular public meetings. Seven WCAF members sat down with City Attorney Dan Shaver and explained that the persistent Christian prayers at public meetings made it look like the City preferred Christianity over other religions, and over non-religion. The prayers divided citizens along religious lines, made some meeting attendees feel like outsiders and violated the establishment clause of the First Amendment, which aims to keep government and religion separate. WCAF wanted invocation speakers to stop naming a specific deity in their prayers, to make the meetings feel more inclusive rather than exclusive. At the time, prayers  before Council meetings were 90 percent Christian, 10% token Jewish.

Shaver agreed that the City’s persistent Christian invocations violated the law, and recommended Council change the invocation practice to comply with law.

But again Council connived to dodge this opportunity to honor religious diversity. They refused to “censor” the invocation. In a nod to accepting some diversity, under pressure they agreed to let anyone come and say an invocation before meetings regardless of religious or group affiliation. They also adopted a policy that stated speakers should not “exploit the invocation opportunity to proselytize.” The new policy also says that if an invited person fails to show up to say and invocation, Council will hold a moment of silence instead.

Since then, Council has had more moments of silence in lieu of prayers at their meetings, which does help show more respect for religious diversity. Yet time and again, religious figures who do show up to give invocations before Council meetings openly proselytize by saying name of “Jesus Christ,” and Council simply ignores these violations of their own policy.

After seeing repeated breaches of their new invocation policy, in 2013, WCAF pointed out to the City that religious representatives they invite to say the invocation have continued to use the opportunity to proselytize for Christianity by invoking the name “Jesus Christ” at public meetings, even though the City’s policy asks them not to. Again WCAF asked the City to enforce their own invocation policy and put an end to their divisive, overt public preference for Christianity.

Council did not respond to the request. Rather, they continued to host Christian prayers at public meetings, effectively thumbing their nose at years of citizens’ requests to respect religious diversity. To this day Council has not admonished a single violator of their policy prohibiting use of the invocation to proselytize.

The statement the mayor makes at the beginning of Council’s public meetings that attendees can “sit, stand or leave the room” during the invocation, presumes the prayer will offend some attendees. It’s a statement that negates the City’s claim on their website that they strive to respect religious diversity. Rather, it’s the opposite; Council has actively worked to preserve religious divisiveness at every turn, ignoring pleas from citizens over many years to treat all religious groups, and people of no religion, equally by remaining steadfastly neutral in matters of religion.

Maybe Council can learn from what happened at CMU last fall with a planned, on-campus bible distribution.

In November, 2015 a group of Colorado Mesa University (CMU) nursing students asked CMU President Tim Foster to stop Gideon Bible giveaways at their pinning ceremony, and at future pinning ceremonies, saying it was an overtly Christian practice and had no place at a public school. After consideration, Foster concluded religious endorsements by the school were divisive and disrespectful towards non-Christian students and their parents, and because the school is supported by taxpayer funds, endorsements of Christianity on campus also violated the U.S. Constitution. Foster “got it,” and perhaps because he is an attorney himself and has a better grasp of the law, he decided the right course of action was to end Bible giveaways at CMU events forever.

Foster explained his decision in an op-ed in the Daily Sentinel, saying,

What is meant here is the kind of respect backed up by actions, not the disingenuous kind of bobbing and weaving and lip service Grand Junction City Council has dished out to area residents for the last 15 years when faced with similar requests to end blatant endorsements of Christianity by the City.