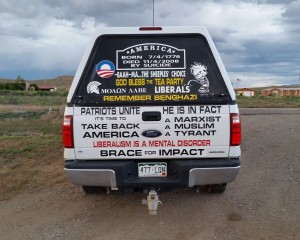 Liberals fight to advance the unalienable rights enshrined in the U.S. Constitution and Bill of Rights: freedom of speech, an independent press, freedom of religion, separation of church and state, equal treatment under the law, voting rights for all adult citizens, and women’s rights including equal pay and reproductive rights. Liberals support civil rights (the rights of citizens to political and social freedom and equality) and everyone’s right to due process. Liberals support protection of the environment, clean oceans, clean air and protection of public lands. Liberals support everyone’s right to health care and an education.

These are all good things. There’s not a bad thing among them.

What is a liberal? 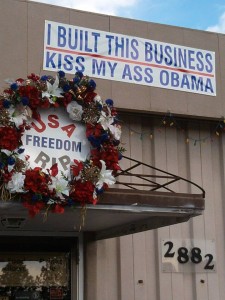 Banner using foul language that a local business owner, a non-liberal, put on the front of his business on North Ave.

Liberals are open-minded and believe in positive, forward-looking change. Liberals are unconstrained by traditional or conventional ideas, and instead think beyond the old ways to consider a far greater realm of possibilities.

Liberals believe in promoting the general welfare, as the Constitution requires. They believe all people should be treated equally and with respect, that everyone should have the same access to opportunities for a better life regardless of their race, religion or ethnic background. Liberals believe workers are entitled to a reasonable work week, paid sick time, paid vacations and living wages that a worker can support a family on. Liberals support public transportation and safe, clean public water supplies. Liberals support workplaces that are free of hazards, harassment and discrimination. Liberals believe climate change is based on human actions and that we must waste no time in moving toward using forms of energy that are cleaner, more efficient, renewable, sustainable, lower priced and safer for workers.

Liberal policies include things people rely upon every day, like the Social Security Act, which created the right of Americans to a basic pension in old age and a financial safety net if they become disabled; the GI bill, which funds generous financial benefits for veterans like tuition and low-interest loans; unemployment insurance, which provides a financial safety net for people who lose their jobs, and the Americans with Disabilities Act of 1990, which prohibits discrimination against physically and mentally disabled persons.

Liberals, YOU make the difference for everyone. Be proud of who you are. 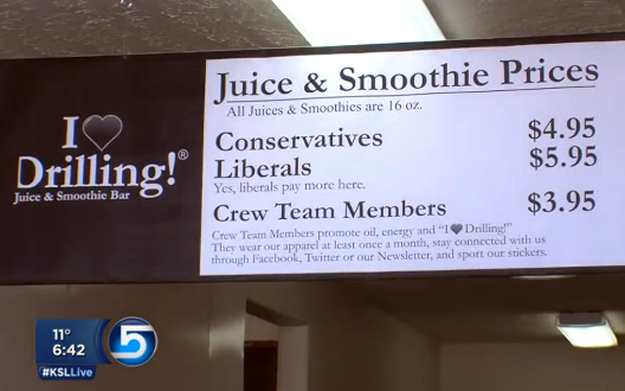 The “I Love Drilling” Juice Bar in Vernal, Utah, charges different prices to customers based on whether they are liberals or conservatives.

8 comments for “Liberals, be very proud of who you are”