An event held by embattled right wing Mesa County Clerk Tina Peters at the old county courthouse that was billed as a “press conference” turned out to be more of a rally of her supporters Monday, as the event was poorly attended by local media outlets. Two newspapers were represented, and no television stations were there.

Peters’ talk seemed to focus on impugning the Mesa County Commissioners for entering into another contract with Dominion Voting Systems to provide secure voting equipment to the County and keeping it maintained until 2029. Peters also waved what she said was a stack of emails from the county commissioners that she had obtained that she believes show the commissioners doing something detrimental to county citizens. Peters insisted she had exposed massive voter fraud in Mesa County, but still has not provided conclusive proof.

About 50 people gathered for the event. Usually at a press conference, the people holding the press conference answer questions from the media and others, but this was not the case at this event. There was no public address system, which made Peters very hard to hear. Sheronna Bishop, a right wing provocateur from Garfield County and defender of Tina Peters, was also present and spoke, but neither seemed to invite questions. At one point, people asked Bishop to speak louder so they could hear her, but when people tried to ask questions of Peters and Bishop, the questioners were heckled and the crowd yelled expletives at them. 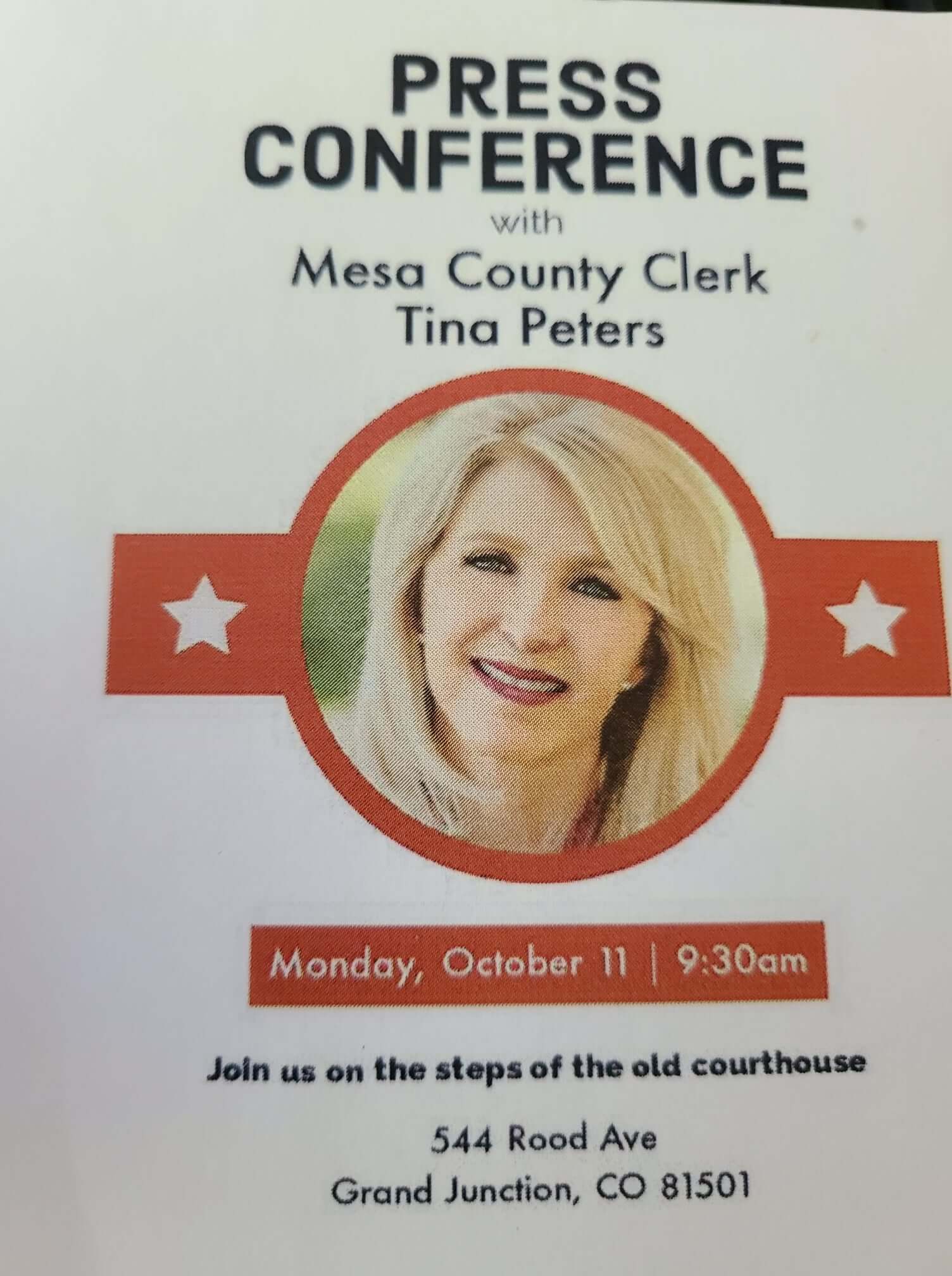 Post on “Stand for the Constitution” Facebook page billed the event as a press conference, but it was more of a rally and few news outlets attended

About 5 minutes into the video, someone in the crowd asked Bishop why she was at the event, since she is not a resident of Mesa county. He pointed out she was an agitator.

They [Tina Peters supporters] were all shouting their words of support, but when my wife and I and a couple others started shouting questions for her, those around began saying vile things. Some of my faves are “You serve Satan,” “You’ll burn in hell,” and “You F****ing commie piece of shit.”

When I called out Sherronna for coming all the way down from Garfield Co as an interloping agitator, that’s when they all started to crowd around me, yelling abuse in my face, and one man shoved me…

An altercation broke out and a woman fell and hit her head. An ambulance was called.

Many Peters supporters also belong to the far right wing extremist group “Stand for the Constitution,” (SFTC), whose members believe without evidence that former President Trump won the 2020 election. The group meets regularly at the Appleton Christian Church and has been threatening “holy war” and “civil war” unless the county commissioners declare Mesa County a “constitutional sanctuary,” where state and federal laws don’t apply. The group is also promoting a bloc of three extremist candidates for District 51 School Board: Willie Jones, who works full time at the Fantasy Strip Club, Angela Lema, who owns the beauty school on North Ave., and Andrea Haitz, who is married to Greg Haitz, a local chiropractor and CBD salesman who ran an unsuccessful campaign for Grand Junction City Council earlier this year.