Recent social media posts by District 51 School Board President Andrea Haitz, and one in particular that she posted on Mother’s Day, are drawing condemnation, disgust and shock from many Mesa County residents who saw them.

The first post was an undated selfie in which Haitz wore a bright red T-shirt with large, white varsity-style lettering that says “MAKE AMERICA FLORIDA.” Below her post, Haitz wrote “❤️ my new shirt,” and she promoted the boutique in the Wax It Salon where she found it.

Haitz’s shirt promotes a federal super pac called “Make America Florida” that was established to help elect far right-wing Florida Governor Ron DeSantis to the U.S. presidency in 2024. The “Make America Florida” pac has a Twitter account with posts that indicate the group promotes racist, anti-immigrant, anti public health, anti-vaccine, anti-mask and anti-LGBTQ sentiments and policies. The pac also supports laws restricting voter access to the ballot box that have been enacted in a number of Republican-led states in support of Trump’s Big Lie that the election was stolen from him through massive, organized voter fraud.

No such widespread election fraud has been found despite multiple audits in several states that affirmed President Biden’s victory, and at least 63 failed lawsuits that sought to overturn the results of the 2020 presidential election.

National Youth Risk Behavior Surveillance studies by the Centers for Disease Control show LGBTQ youth are far more likely to be bullied, be targets of violence and harassment, and that they have higher suicide rates than their straight peers, but Haitz’s posts show she has no empathy whatsoever about the difficulties facing these youth. The Trevor Project, which conducts a national survey on LGBTQ mental health, says Florida’s “Don’t Say Gay” bill “appears to undermine LGBTQ support in schools and include[s] vague parental notification requirements, which could effectively require teachers to ‘out’ LGBTQ students to their legal guardians without their consent, regardless of whether they are supportive.” The group also finds that when actions are taken to affirm and show respect towards transgender youth, it lowers rates of suicide among this group. The 2017 Healthy Kids Colorado Survey found (pdf) that 44.8% of Lesbian, Gay, Bisexual, Transgender, and Queer (LGBTQ+) youth reported considering suicide, and 19.9 percent of them had actually attempted suicide within the previous 12 months.

No empathy, no kindness 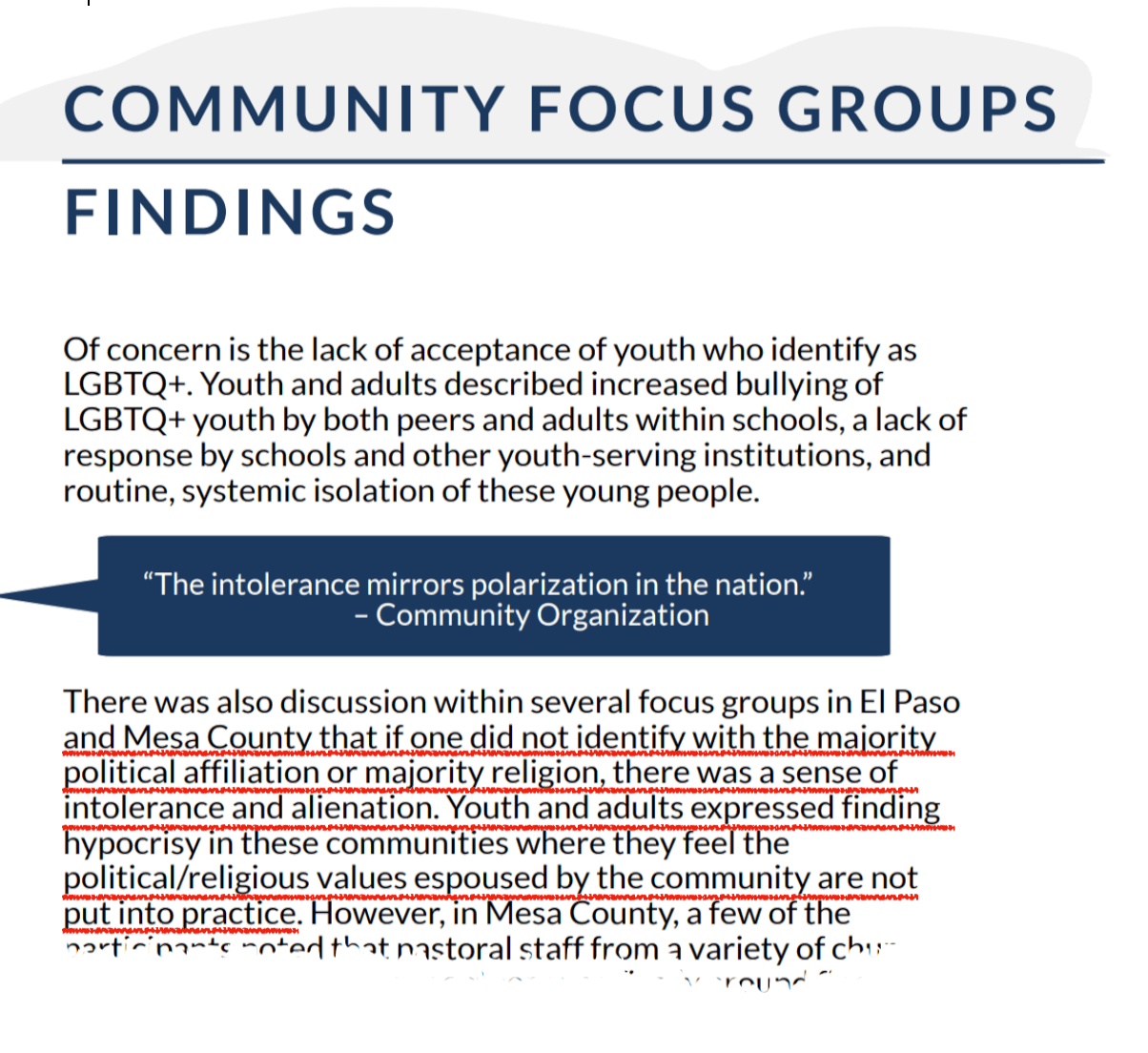 The study found that in Mesa County in particular, LGBTQ youth feel judged and experience a stark lack of acceptance. The survey related responses from focus groups of teenagers in Mesa County. Study authors found,

“…a sense that the community is not accepting of differences or is judgmental was also expressed across many focus groups in the four counties, but was discussed much more in El Paso County and Mesa County. Youth explained that some people are afraid to be who they are, and that youth are growing up in a culture that expresses more harsh judgment, belittling and a lack of acceptance, let alone tolerance, of people who are unlike the norm in the community.

Such fears and mental anguish among District 51 teenagers is worsened when adults in positions of trust tee up anti-transgender sentiment through social media posts that intentionally stoke antipathy towards transgendered people.

Haitz’s second post is a cartoon that shows a pregnant woman in an exam room resting her hand on her belly and asking the male doctor, “Is it a boy or a girl?” The doctor answers, “That’s for the kindergarten teacher to decide.”

Many people also saw Haitz’s second post as denigrating transgender people, as well as taking a dig against teachers. Reaction was swift, plentiful and angry. Readers expressed outrage, shock and disgust at the lack of compassion and understanding displayed by District 51’s school board president:

Second post by Haitz in recent days that drew condemnation. People interpreted it as a dig against teachers, and encouraging of hatred against transgender people

Someone uploaded screenshots of Haitz’s posts onto District 51’s Facebook page and the comments in reaction were as follows: 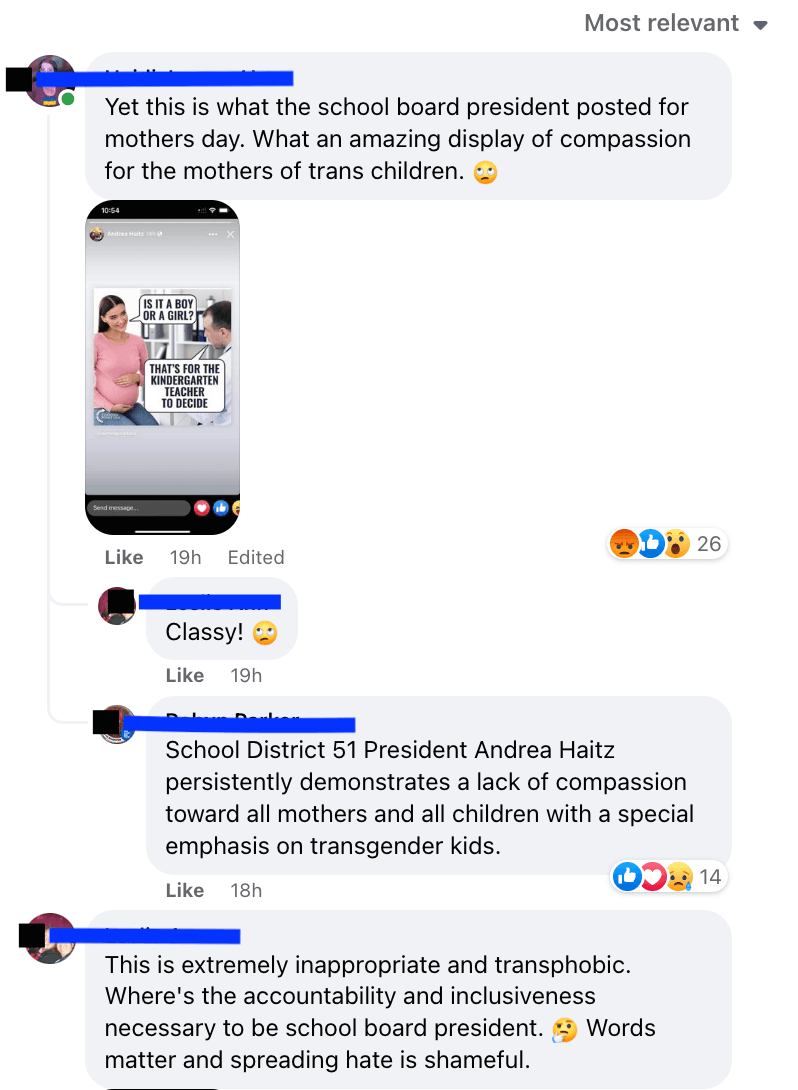 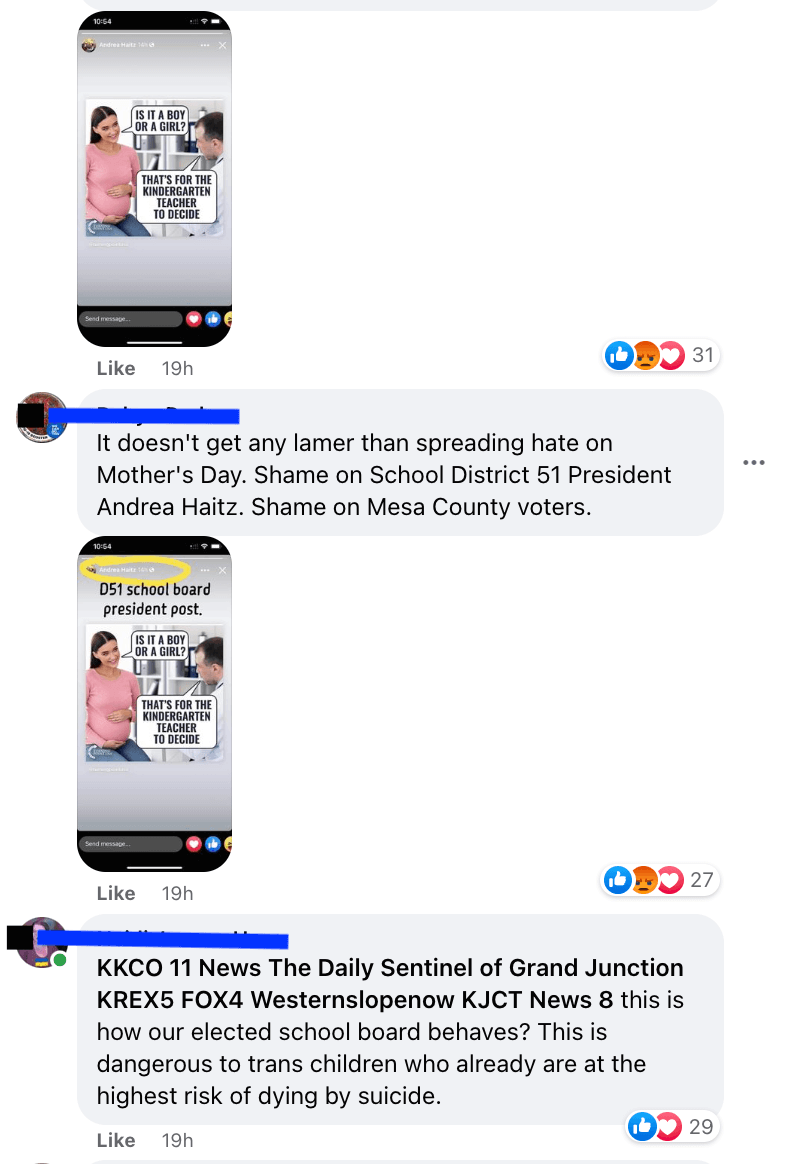 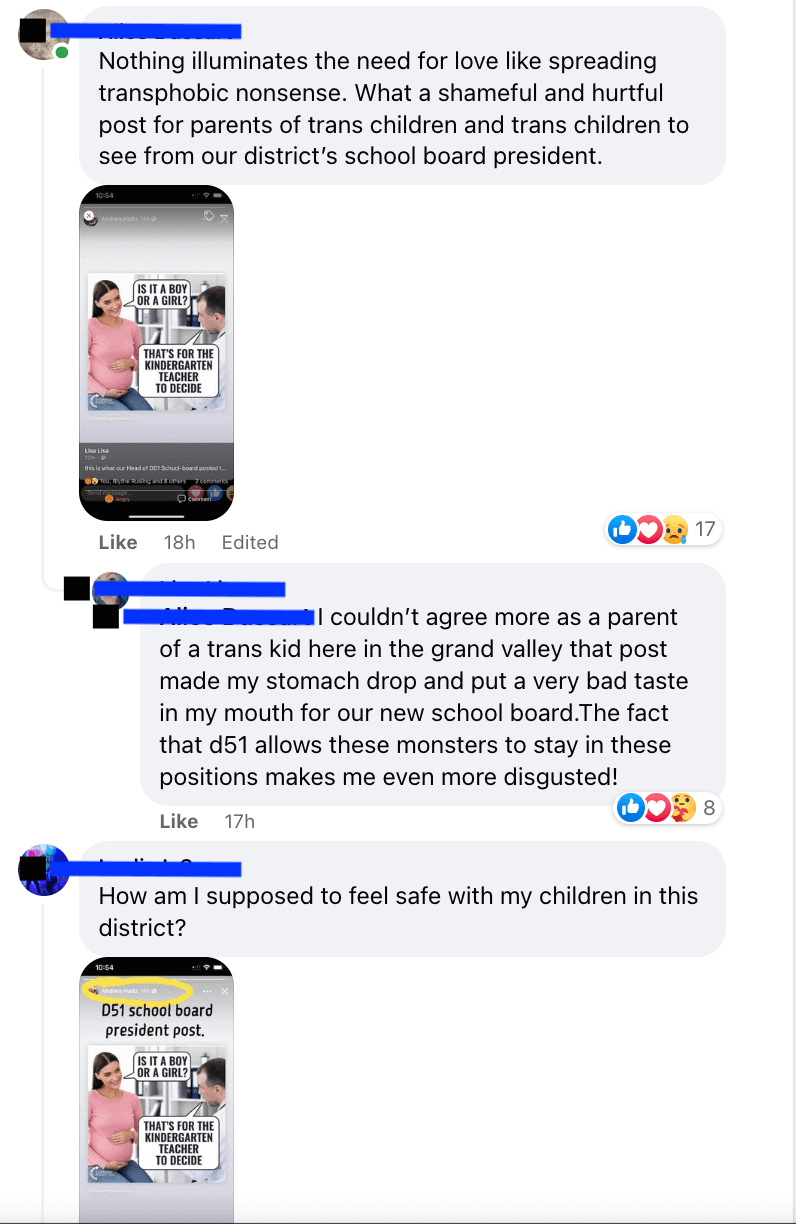 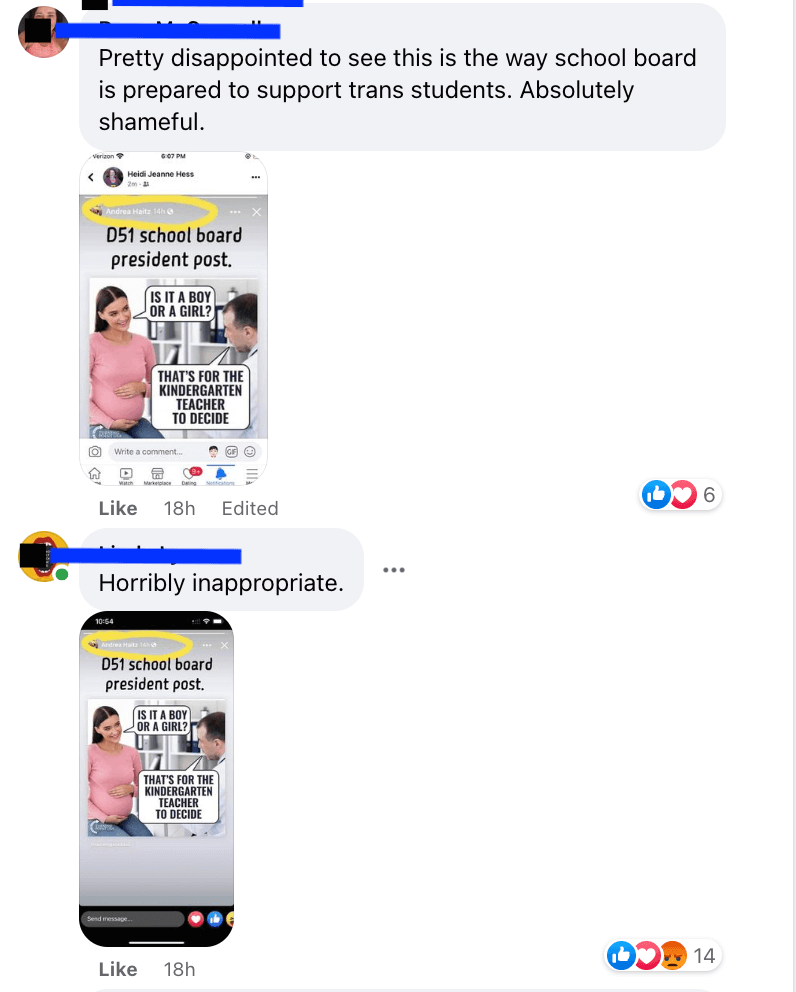 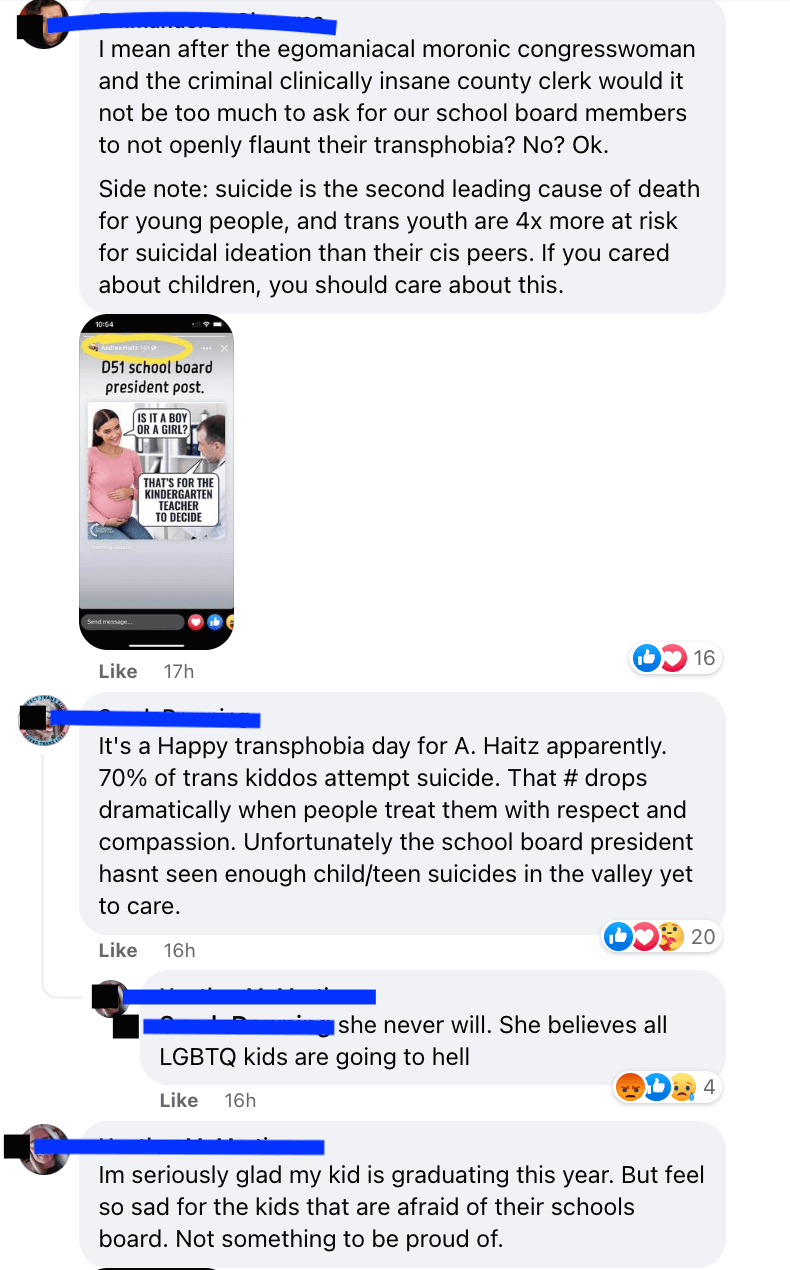 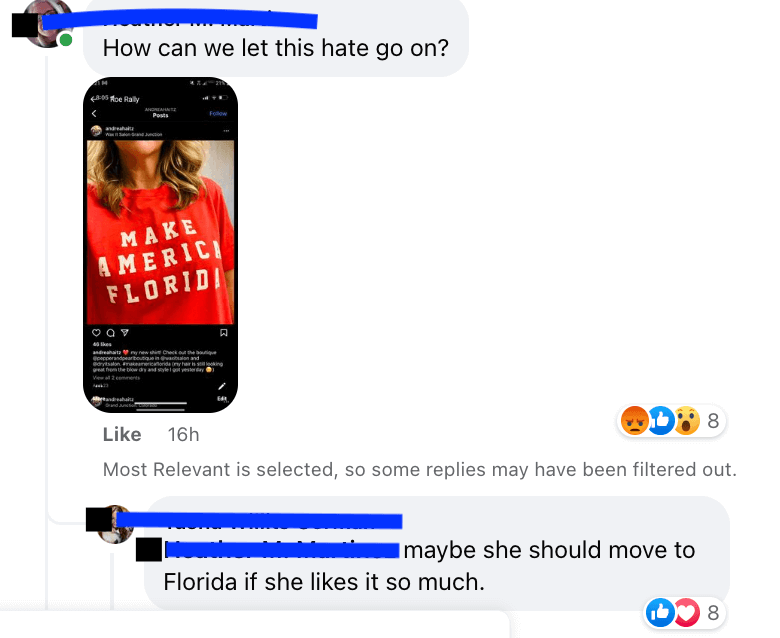 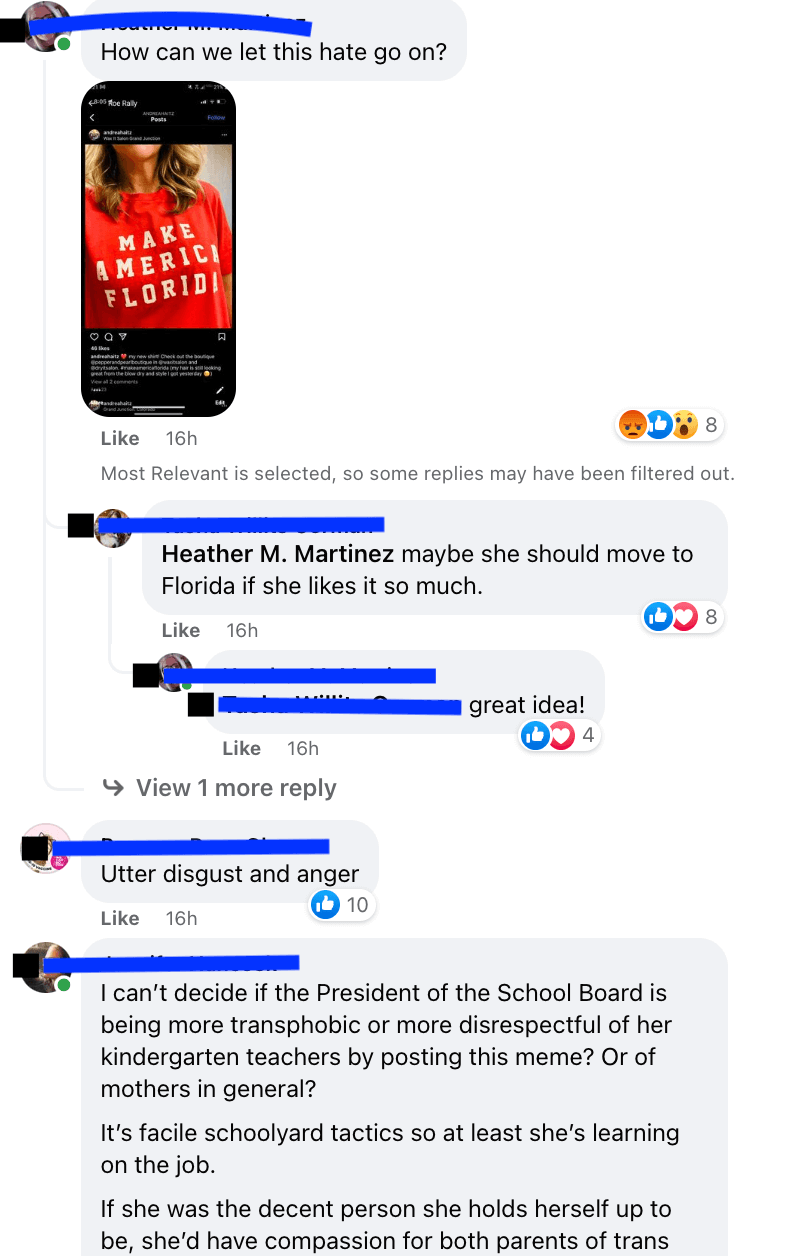 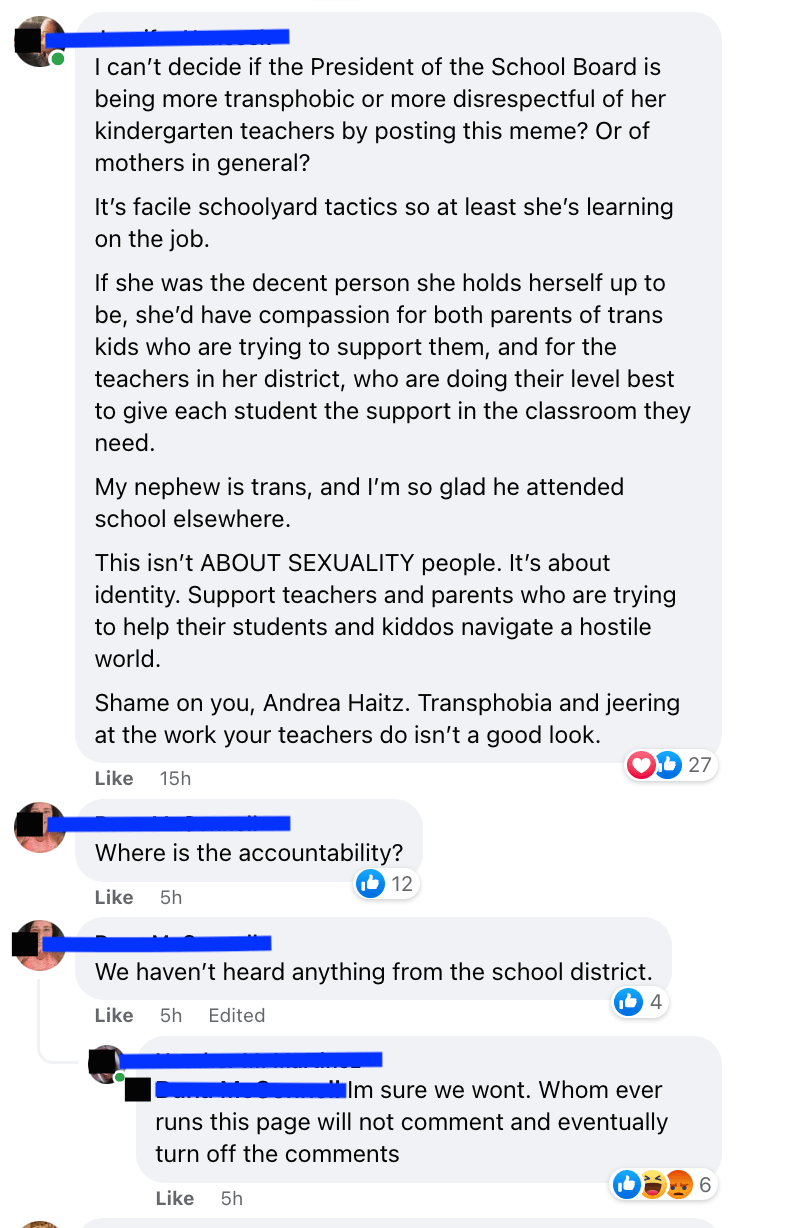 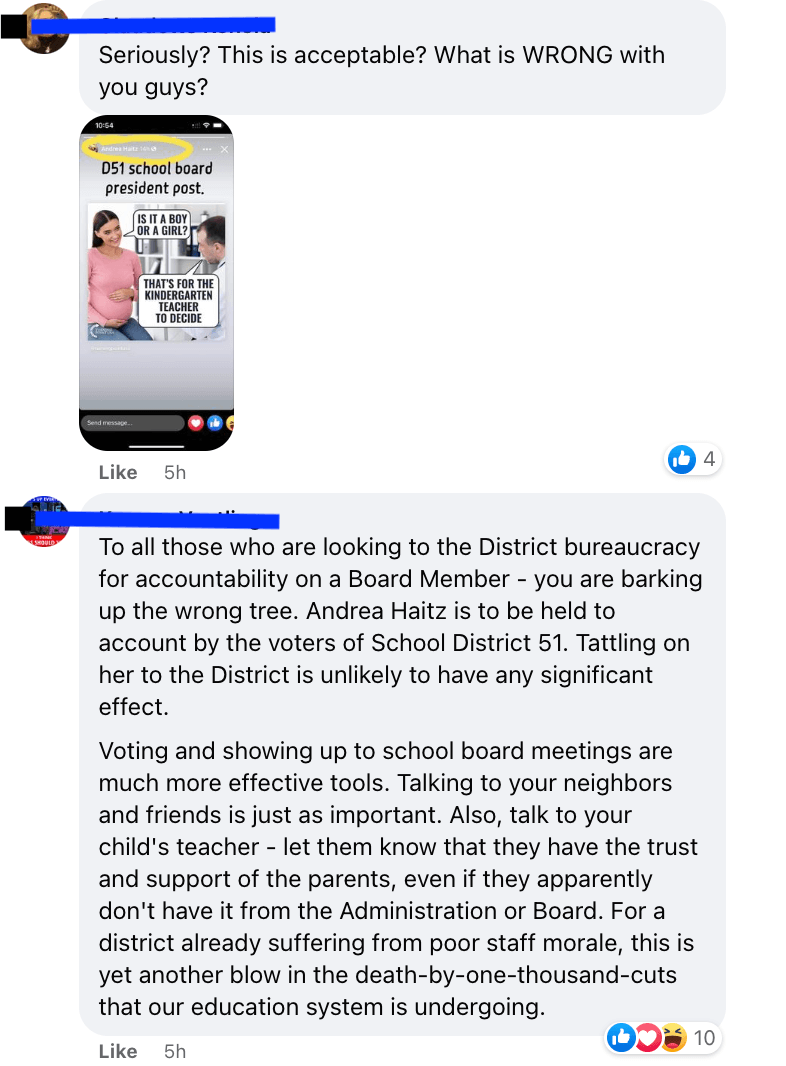 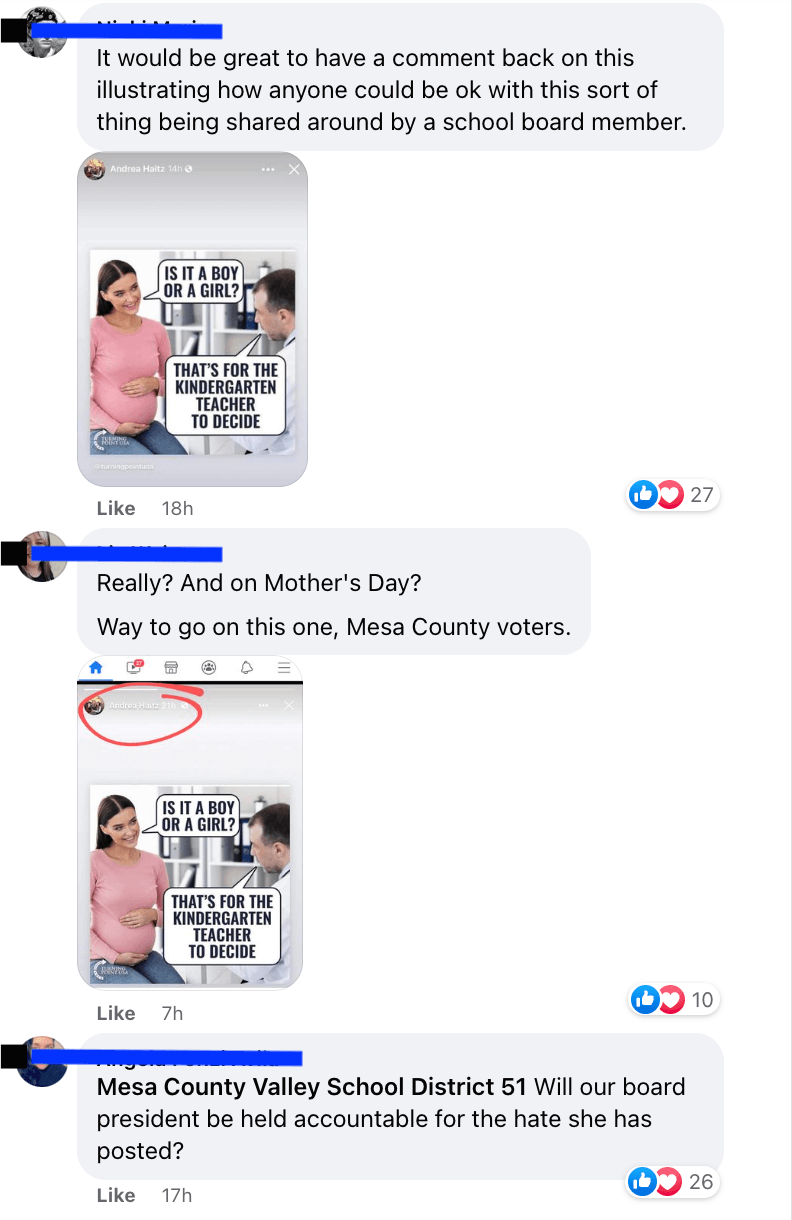