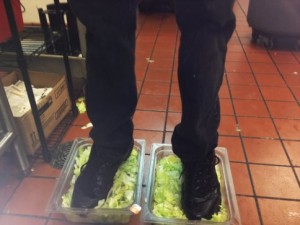 Burger King employee photo that caused one of the biggest PR disasters of 2012.

Business Insider has published a list of the biggest PR disasters of 2012. There are some doozies, and social media figured into many of them. An Ohio Burger King employee took a photo of an employee standing with both feet in tubs of lettuce (shoes on) and then posted it on the local newspaper’s Facebook page with a caption that said, “This is the lettuce you eat at Burger King.” KitchenAid was forced to quickly delete a tweet made from their account about Obama’s grandmother that someone sent out during one of the presidential debates. It said “Obamas gma [grandmother] even knew it was going 2 b bad! ‘She died 3 days b4 he became president’.” American Apparel exploited Hurricane Sandy by running a “SandySale” in which they offered 20% off all merchandise. Gap did, too, but then apologized for it. (American Apparel did not.) Just hours after the horrific theater shooting in Aurora, Colorado, in which a crazed gunman murdered 12 innocent people, The National Rifle Association’s magazine, American Rifleman, tweeted “Good morning, shooters. Happy Friday! Weekend plans?” A Taco Bell employee tweeted a photo of himself urinating on a plate of nachos and asked his Twitter account followers what he should pee on next. Dan Cathy, the Chief Operating Officer of Chick-Fil-A came out against gay marriage, causing a national uproar and protests at Chick-Fil-A restaurants from coast to coast. McDonalds started a PR campaign in which they asked people to tweet stories about McDonald’s food to #McDStories. No doubt they hoped to get positive stories they could use in future advertising campaigns, but instead they got an avalanche of tweets from people who found gross foreign objects in their food or got hospital-grade food poisoning from their McDonalds’ meal. McDonalds pulled the #McDStories campaign after an hour.