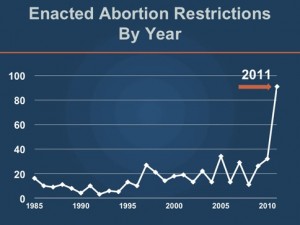 House Republicans passed symbolic legislation aimed at further restricting women’s ability to obtain an abortion nationwide — legislation that stands no chance of surviving the Senate, and that the President has vowed to veto. This week House Republicans voted to limit women’s right to obtain an abortion until the first 20 weeks after conception. Republicans passed the measure even though they know it is illegal because it defies the Supreme Court’s 1973 Rowe vs. Wade ruling that says women can legally obtain abortions up until the time a doctor deems a fetus is viable, or can live outside the womb, generally around the 24th week of gestation. Rep. Trent Franks (R-Arizona), who brought the bill, initially did not include any exceptions for rape or incest, saying in a committee hearing that that was because “the incidence of pregnancy from rape is very low.” Rep. Michael Burgess (R-Texas), defending the bill, in a crazy statement went even further, saying he felt abortions should be restricted to 15 weeks, because that’s the point at which male fetuses can put their hand between their legs and “feel pleasure.” And Republicans’ war on women doesn’t stop there. In Wisconsin, Republicans just passed a bill that will force women seeking abortions to obtain medically unnecessary ultrasounds first. It also requires doctors who perform abortions to have admitting privileges at hospitals within 30 miles of the clinics in which they work, a provision that will shut down at least one Planned Parenthood clinic in the state. Wisconsin Governor Scott Walker says he will sign the bill. Similar bills have appeared in states throughout the union. In fact, banning abortion is almost all Republicans have been working on with any vigor in the last few years. The number of bills brought to restrict abortion in various ways has skyrocketed in the U.S. since 2010, limiting the rights of women all over the country.