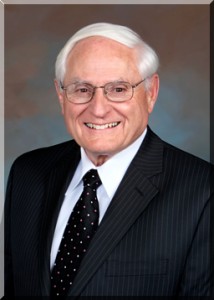 Sitting Grand Junction Mayor Sam Susuras  backs the fraudulent designation of a new airport building in order to keep the federal funding obtained for its construction.

Former Grand Junction Mayor Bill Pitts, speaking during the public comment period at the February 5th City Council meeting, charged current Grand Junction Mayor Sam Susuras with supporting dishonest behavior by former Airport Director Rex Tippets and asked Susuras to voluntary step down from the airport board. Pitts referenced a February 4 article in the Daily Sentinel that said the Grand Junction Airport Board voted to change the designation of a building currently under construction at the airport to reflect its administrative purpose instead of its original designation as a new terminal building. All Airport Board members except Susuras recently concluded that Tippets, who was fired December 17, 2013 amid financial fraud allegations, had purposely mischaracterized the building to federal officials to get funds for construction.  The Federal Aviation Administration (FAA) agreed to fund 65 percent of the $6 million building as long as it would be a new terminal, but would not help fund an administrative building.

Susuras has said the conclusion that Tippetts mischaracterized the building to the FAA is not valid. Susuras also stated his belief that former airport board members who served during the period now under investigation for fraud were “visionaries” for trying to expand the airport.

Pitt’s statement to Council is as follows:

“I’d like to call your attention… to an article in today’s paper of “Airport Board hopeful faults panel’s credibility.”

I attended the last Airport Authority meeting — which I’ve been attending quite regularly for several years — and at that meeting there was a discussion about changing the name of a building and returning funds to the government which were obtained, as I understand it, fraudulently.  It is the opinion of our representative to the Authority, Mayor Susuras, that we keep the funds under the false pretenses under which it was received, and I take this as an insult to our community that such representation would made by our City Council that we retain funds from the federal government of several million dollars, that were obtained fraudulently, to change the name of a building, and I suggest that Mayor Susuras step down as the representative of City Council on the airport authority and suggest strongly that the Council appoint somebody to the Authority that can stand up for the credibility of the community which he represents.”

Mayor Susuras, whose term on the Airport Board expires in May, 2014, carried on with the Council meeting as though nothing had been said.

See the video of the meeting here. You can skip directly to the Citizen Comments part of the meeting about eight minutes in to the video, and Mr. Pitts is the only person speaking during the comment period.