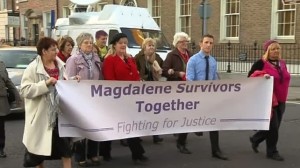 A BBC investigation has revealed that Irish nuns from the Catholic church took female children out of church-operated state orphanages and used them as unpaid slave labor in church-owned commercial laundry facilities called the Magdalene Laundries. Women and girls made to work in the laundries were held as prisoners and endured significant abuse. The slave laundries existed into the 1980s and did the laundry for restaurants, railway stations, convents and the airport. Some women were held in the laundries for over 50 years.

The Irish Examiner newspaper investigated the finances of religious orders that operated the laundries in 2012 and found they owned assets of $1.9 billion. (Yes, that’s “billion” with a “B.”).

One woman, the main subject in BBC’s report, escaped the laundry, ran to a nearby church for help, got raped by a priest and returned to the laundry. She became pregnant from the rape. The nuns took her baby away from her at birth and gave it up for adoption. The woman was forced to work in the laundry for 14 years. She was finally reunited with her daughter 40 years after her birth. The woman is demanding an apology — just an apology — from the Church.