Yet another incident of inappropriate proselytizing was reported in a District 51 school late last month. The parties spent the last few weeks working to resolve it. An update was just recently available. Following is a description of what happened.

On December 31, the father of a Lincoln Orchard Mesa (LOM) Elementary student contacted Western Colorado Atheists and Freethinkers (WCAF), a western slope group that advocates for separation of church and state, about an inappropriate incident of proselytizing involving his child that occurred at LOM on November 20.  The student is 8 years old and in the 3rd grade.

According to the parent and child, here is what took place:

LOM students were taking their regularly-scheduled lunch break in their school’s lunchroom on Friday, November 20, 2016.  The student at the center of the incident was sitting at a table chatting with friends in the lunchroom, as was usual for kids at lunch. During the conversation, the student shared with her friends that she did not believe in God. A friend who heard the comment immediately went to a nearby lunchroom assistant named Jody Payne and told her that her friend did not believe in God. Ms. Payne went over to the table and told the student, in front of her friends, that “God created everything” that she “needed to, and should believe in God.”

After the student went home that day, she told her father about the incident. The parents felt Ms. Payne’s actions that day amounted to inappropriate and illegal proselytizing of their child on school grounds and during school hours, and they were disturbed by it. 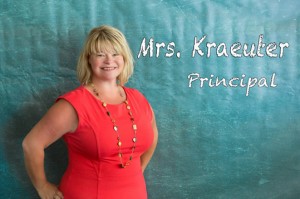 They emailed LOM Principal Leia Kraeuter about the incident that same day and asked for a meeting to discuss the incident and get the school’s version of what happened. The parents were able to get a meeting in person with Principal Kraeuter and the lunch assistant, Ms. Payne, at which time Ms. Payne apologized verbally to Mr. and Mrs. Daniel for the incident. But the parents asked that the lunch assistant apologize directly to their daughter, who was that target of her comment, not to themselves. They also asked the principal for “copies of any training which would be implemented/given to staff regarding the regulations of discussing topics such as this in the school.”

The father told WCAF that Principal Kreauter refused to arrange for an apology to their child or tell them what training or guidance school staff members get regarding matters like this. Instead the principal told them “she was no longer willing to be the point of contact regarding this incident.”

The parents have kept copies of their correspondence with the school and copied the info to Superintendent Steve Schultz on their emails as well.

In a recent update on the situation, the father reported that the parents had a meeting with the District 51 Superintendent about the matter, at which time they were told that policies governing these types of incidents were only recently put in place, on November 17, 2015, just three days before the proselytizing incident involving their child took place. District 51’s Policy AC (pdf) is titled “Nondiscrimination,” and applies to students as well as employees. It AC states,

No student or other person who is otherwise qualified shall be excluded from participation in, be denied the benefits of, or otherwise be subjected to unlawful discrimination under any district program or activity on the basis of race, color, national origin, ancestry, creed, religion, sex, marital status, sexual orientation, disability or need for special education services. [Bold emphasis added.]

The second policy, AC-E (pdf), implemented the same date (11/17/15), is procedural and gives guidance on how to report such incidents. It directs complainants to the School District’s compliance officer, Dan Sharp, and the federal Department of Education’s Office of Civil Rights.

Since the policies were in force at the time of the incident involving their child, the parents are considering possible legal options for dealing with the incident, but have not yet decided what to do.