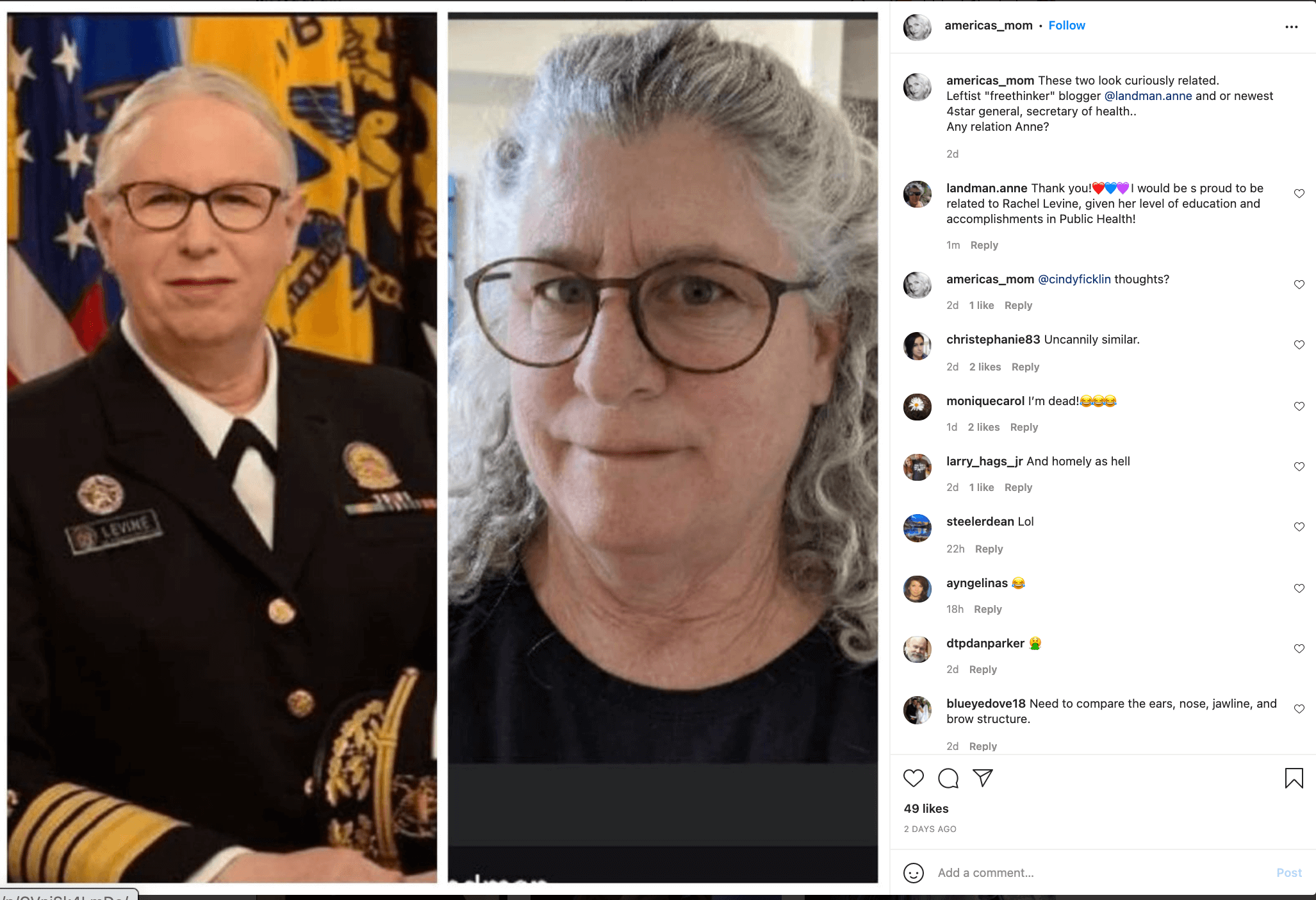 In what apparently was meant as a slur toward trangender people, Garfield County election conspiracy theorist Sherronna Bishop, who calls herself “America’s Mom,” in this Instagam post today compared Grand Junction blogger Anne Landman to Admiral Rachel Levine, M.D., newly-appointed as U.S. Assistant Secretary of Health and among the most accomplished public health physicians in the country.

In what was meant to be a slur aimed at transgender people, Garfield County election conspiracy theorist Sherronna Bishop, who bills herself as “Americas Mom,” today in an Instagram post compared AnneLandmanBlog author Anne Landman to Admiral Rachel Levine, M.D., the highly accomplished public health physician who was recently confirmed by the U.S. Senate as the nation’s new Assistant Secretary of Health in the U.S. Department of Human Services. 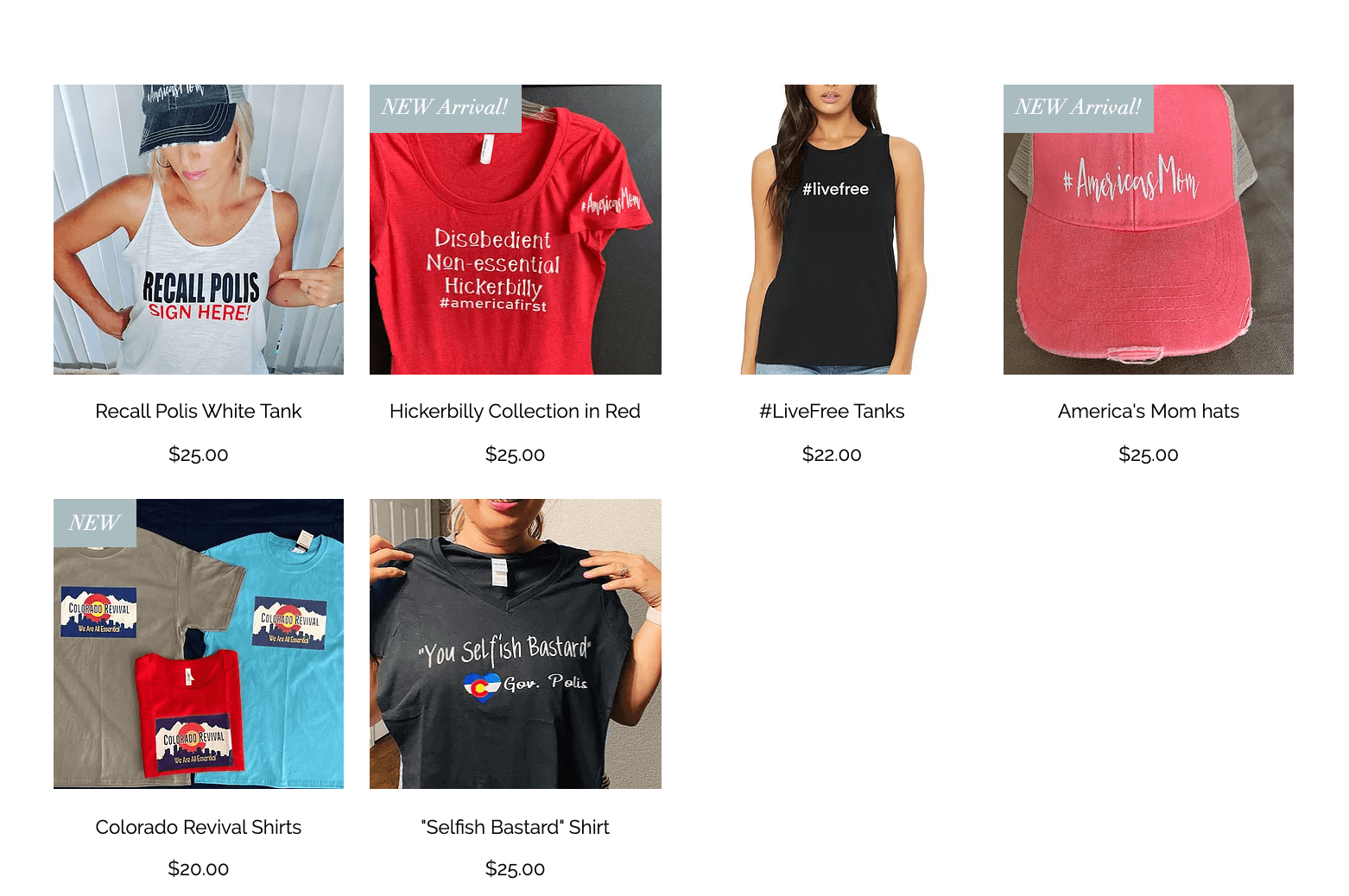 Dr. Levine was educated at Harvard College and Tulane University School of Medicine. She completed her training in Pediatrics and Adolescent Medicine at Mt. Sinai Medical Center in New York City, and went on to become a Professor of Pediatrics and Psychiatry at Penn State College of Medicine. Dr. Levine also served as Vice-Chair for Clinical Affairs for the Department of Pediatrics, and Chief of the Division of Adolescent Medicine and Eating Disorders at the Penn State Hershey Medical Center. 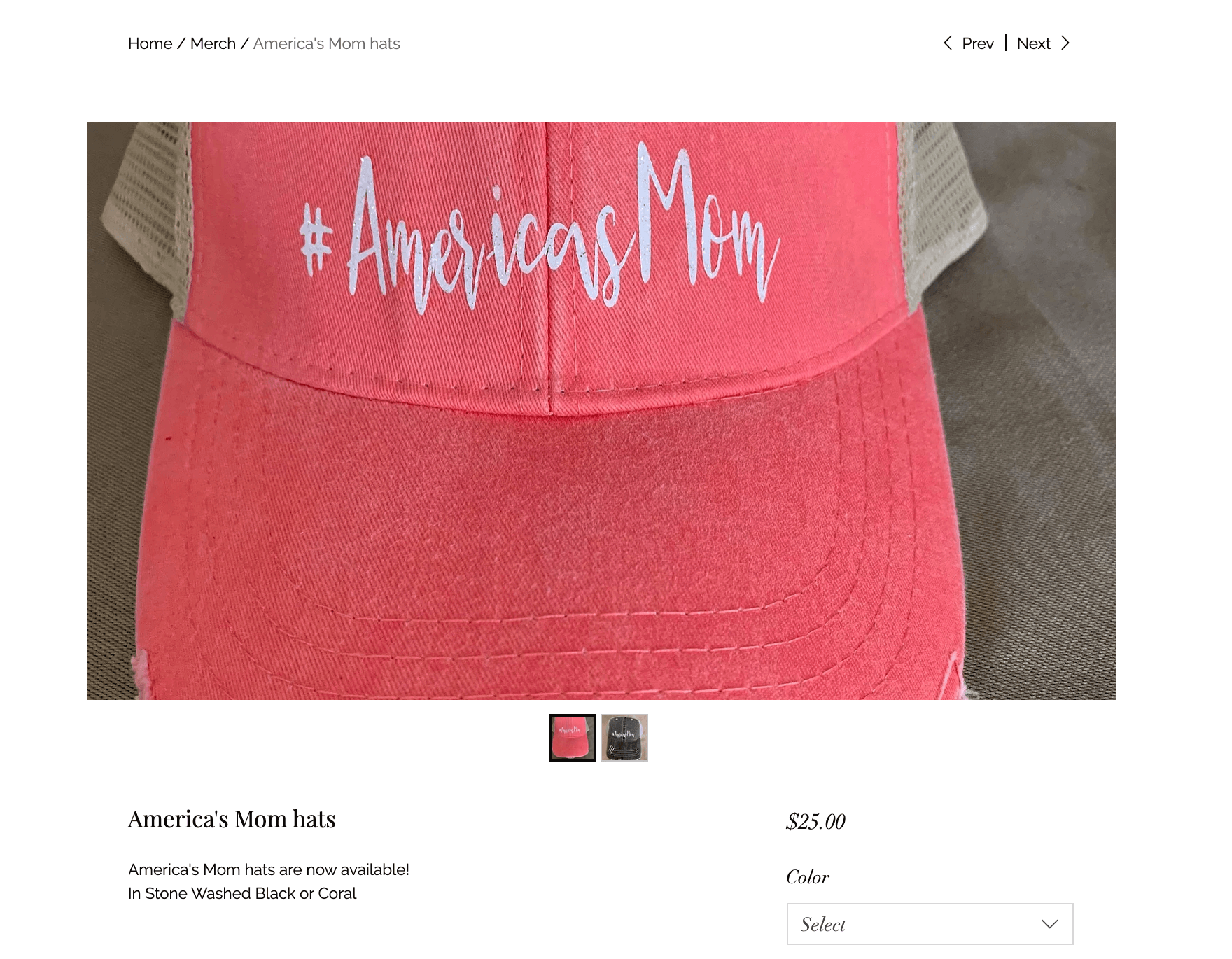 Sherronna Bishop is a Garfield County day spa operator who  promotes herself online by selling swag, including this $25 “Americas Mom” baseball cap. (Note “Americas Mom” is always misspelled without the required apostrophe.)

In 2015,  Dr. Levine was unanimously confirmed as Pennsylvania’s Physician General by the PA state Senate. In that position she made great strides in addressing Pennsylvania’s opioid crisis. Her landmark decision to issue a standing order allowing law enforcement to carry the overdose-reversal drug Naloxone and allow Pennsylvania citizens to purchase and use it without a prescription from their doctor, has saved thousands of lives.

While PA Physician General, Dr. Levine also worked to focus attention on maternal health and improve immunization rates among kids. Dr. Levine is a Fellow of the American Academy of Pediatrics, the Society for Adolescent Health and Medicine and the Academy for Eating Disorders.

Dr. Levine was also President of the Association of State and Territorial Health Officials, an accomplished speaker and author of numerous publications on the opioid crisis, adolescent medicine, eating disorders, and LGBT medicine.

In addition to all these accomplishments, Dr. Levine also made history as the first openly transgender person ever to be appointed to a federal position by the U.S. Senate.

In July of 2020, Pennsylvania Governor Tom Wolfe made a public statement defending Dr. Levine in the face of small-minded people who denigrated her for being transgender.

“The COVID-19 pandemic has brought hate and transphobia into the spotlight through relentless comments and slurs directed at Secretary of Health Dr. Rachel Levine, who is a highly skilled, valued, and capable member of my administration and Transgender. The derogatory incident involving the Bloomsburg Fair is the latest of these vile acts, which by extension impact Transgender people across the commonwealth and nation.

“Dr. Levine is a distinguished and accomplished public servant. She is committed to keeping Pennsylvanians safe and healthy, even those who direct hate-fueled attacks at her. I’m proud of the work she has done in her five years serving Pennsylvanians, and her success at leading our commonwealth during the COVID-19 crisis is a testament to her intelligence and work ethic.

“Hate has no place in Pennsylvania, even in the smallest transphobic joke, action or social media post. I’m calling upon all Pennsylvanians to speak out against hateful comments and acts, including the transphobia directed at Dr. Levine and all Transgender people in our great commonwealth.”

To be compared to Dr. Levine in any way, whatever the intent, is for me, a very great honor.