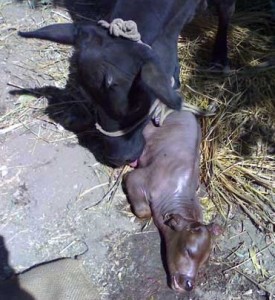 The big biotechnology firm Syngenta is facing criminal charges for covering up a U.S. study that showed cows died after eating the company’s genetically-modified (GM) corn. The charges came after a long struggle by Gottfried Gloeckner, a German dairy farmer and former supporter of genetically-modified crops, agreed to participate in authorized field tests of “Bt176,” a corn variety manufactured by Syngenta that was genetically-modified to express an insect toxin and a gene that made the corn resistant to glufosinate herbicides.  Gloeckner allowed the GM corn to be grown on his farm from 1997 to 2002, and fed the resulting corn to his dairy herd. By 2000, Gloeckner was feeding his cows exclusively Bt176 corn. Shortly after, several of Gloeckner’s cows became sick. Five died and others had decreased milk yields. Syngenta paid Gloeckner 40,000 euros as partial compensation for his losses and veterinary costs. Gloeckner brought a civil suit against Syngenta over the loss, but Syngenta refused to admit its GM corn could be in any way related to the illnesses and deaths of Gloeckner’s cows. The court dismissed the civil case and Gloeckner received no further payments from Syngenta, leaving him thousands of Euros in debt. Gloeckner stopped using the GM feed in 2002, but continued to lose cows. In 2009, Gloeckner discovered Syngenta had commissioned a study in the U.S. of its GM feed in 1996. In that study, four cows died within two days of eating the GM feed, and the study was abruptly ended.