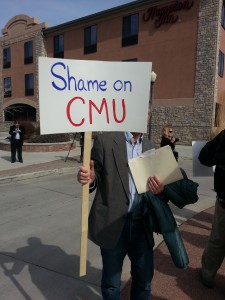 The Daily Sentinel ignored the important back stories about this year’s Energy Expo, leaving people wondering if the paper was trying to protect the local oil and gas industry

In an era of corporate concentration of media ownership, Grand Junction citizens are fortunate to have a daily paper whose publisher, editors and reporters live in the same community in which they work. The thought is that by living here, Sentinel employees will be more responsive and cover what people in this area really need to know, so citizens can make more informed choices when it comes to local politics and economic development.

Since Jay Seaton replaced George Orbanek as the paper’s publisher several years ago, the Sentinel has acted noticeably less like a poodle for the area’s political elite, an started showing more backbone in its reporting. I’ve been greatly impressed by the Sentinel’s new willingness to do whatever it takes to get the information its readers deserve, from filing Freedom of Information Act requests to bringing lawsuits to access to information important to area residents. On occasion, the Sentinel has even taken real risks to pursue its mission. One example is how the paper exposed the hypocrisy of the Grand Junction Area Chamber of Commerce in claiming to promote local business while taking its own business out of town. (Reporting on the chamber’s antics is not without its risks for the Sentinel. The chamber buys huge amounts of advertising in the Sentinel, pumping tens of thousands of dollars into the paper’s coffers annually. That’s money the paper risks losing if it gets crosswise with the chamber.) The Sentinel also reported in detail on the Grand Junction Regional Airport Board’s fraud and corruption and former State Senator Steve King’s embezzling. The way the Sentinel doggedly pursued those stories for its readers was a big reason why I subscribed to the Sentinel again after 20 years of boycotting the paper. I saw real change for the better in our local paper, and wanted to support it with my dollars.

That’s also why the Sentinel’s coverage of John L. Casey’s appearance the Energy Expo was so incredibly disappointing.

Just when I and probably many others started to think the Sentinel was finally starting to tell the real stories of what goes on around here, the poodle re-emerges. Reporter Gary Harmon’s unquestioning coverage of the Energy Expo was insultingly superficial. He took everything Expo organizers handed him at face value and he touched only on the most mundane and perfunctory aspects of the event while ignoring the bigger back stories behind this year’s Expo.

Exactly what were those stories?

Kathy Hall and Bonnie Petersen, the event’s private owners, failed to confer with hosts and sponsors about the speakers this year the way they have in the past. They blind-sided their hosts and sponsors by springing a race-baiting, tea party fringe speaker on them after the event’s promotional materials were already printed. Hall and Petersen profoundly embarrassed, and in some cases offended the western slope’s premier educational institutions, Colorado Mesa University, Colorado Mountain College and the John McConnell Math and Science Center, with their choice of Casey as a speaker and the way they forced him on event hosts; they listed Colorado Mountain College as a host of the event without even bothering to get the schools’ permission to use it’s name. Multiple investigators in different states were unable to verify the positions Casey claims he held in his curriculum vitae, yet the Sentinel held Casey up unquestioningly as qualified to speak at the event.

The Sentinel’s coverage also failed to highlight that people protested the Expo for the very first time ever, and failed to discuss all the reasons why people were outraged enough to push back against this event. The protest was significant for what is says about Grand Junction’s changing political and cultural makeup, and some area residents’ questioning of what Hall and Petersen dish out to our community.

One thing is certain: This year was very different for the Energy Expo. The Sentinel failed as the western slope’s “chronicle of record” by glossing over the important back stories to this year’s Expo and acting as though they didn’t exist.

If the Sentinel really wants to win over area residents and grow its subscriber base, it needs to commit to telling the whole story consistently, and not keep pandering to oil and gas or other special interests by leaving out the most significant information about local issues.