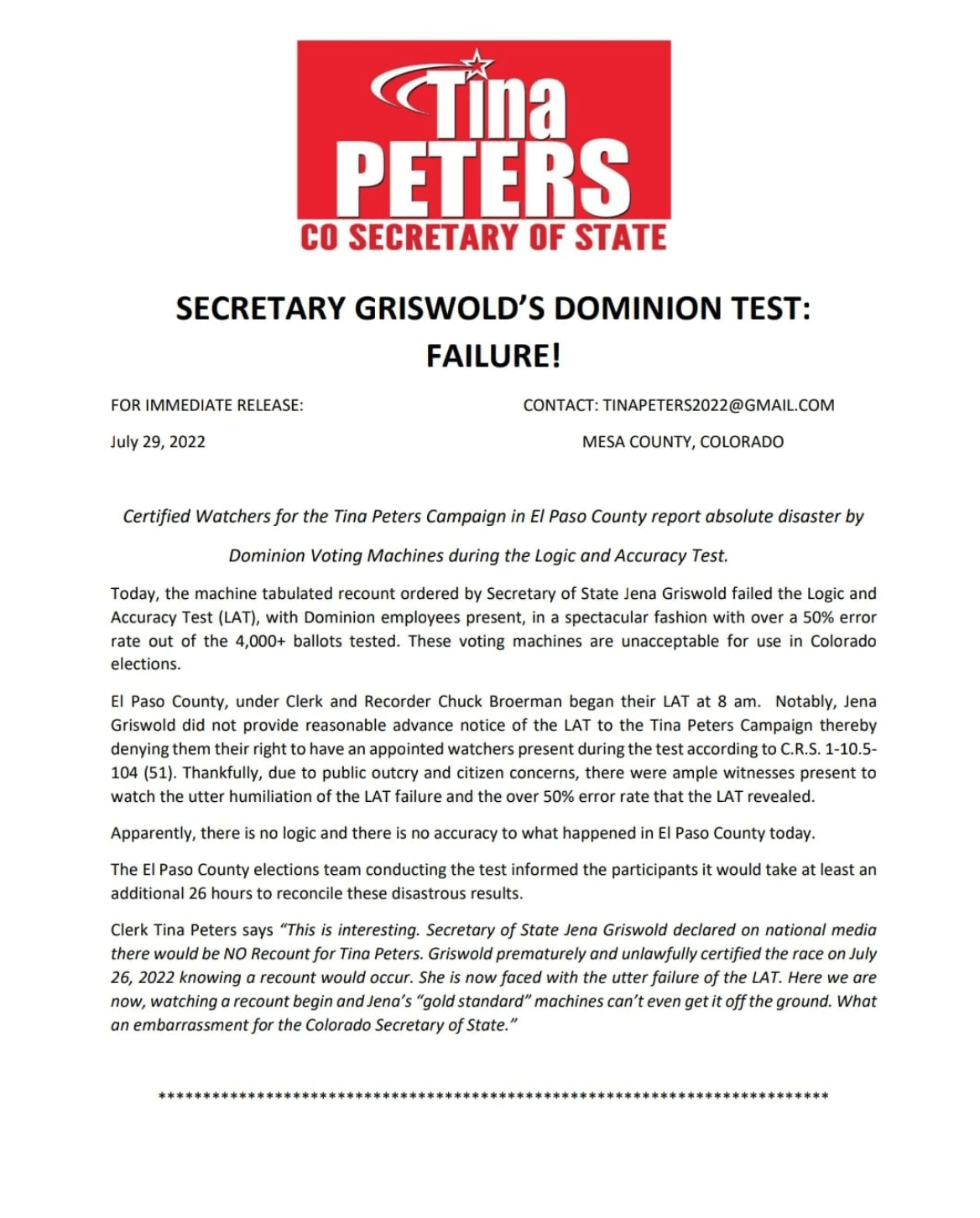 Get ready. The next Tina Peters drama is already happening.

Tina is trying hard to set the scene for a hand recount by claiming there is tremendous fault in the El Paso County recount effort, which has barely just begun.

Tina issued a press release yesterday saying the El Paso County Logic and Accuracy test (a precursor to the recount) was an “absolute disaster.”

Tina’s handler, Sherronna Bishop, who no longer lives in Colorado, magnified Tina’s effort to spin this narrative by posting a similar message on her “America’s Mom” social media account that echoed the same claim — that there was a 50% rejection rate on El Paso County’s Logic and Accuracy test and they must have a hand recount: 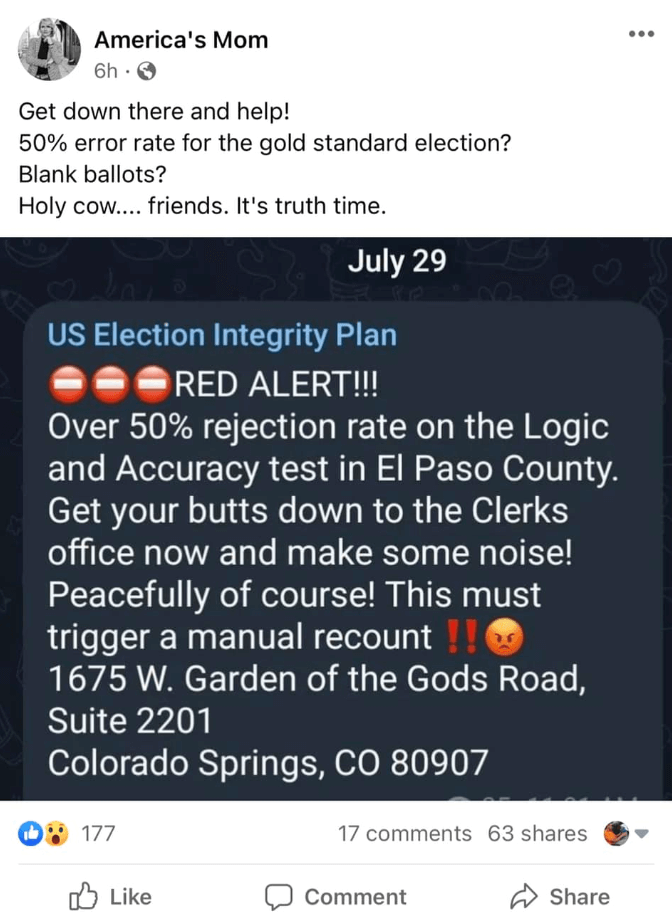 Post from Sherronna Bishop, Tina Peters’ handler, about what to expect next from the Tina Peters camp regarding the state-wide recount.

The two also went on Lindell TV on 7/29, to make the same claim and push the idea that this entitles Tina to a hand recount.

But it’s all a lie to keep Tina in the spotlight and keep the donations rolling in.

Fortunately some Republicans have caught on to Tina and Sherronna’s persistent lies to the public.

Several dyed-in-the-wool, long-time Republicans explain why Tina is either ignorant about how elections systems function, or is flat-out lying in a highly unethical attempt to bilk even more money from her devoted election denying followers.

This is getting embarrassing.

First it was the Fox31 scandal that wasn’t. Today, the same group pushing this, including Sherronna Bishop a.k.a. America’s Mom … put out another fake news account of supposed fraud in the El Paso County recount. The allegation was made that the counting machines were fraudulent because they had a supposed high error rate. But in fact, we now know from talking to actual election officials, that this is just because an error report is produced when a ballot has an undervote (a very frequent occurrence). This feature is not present in the normal election but is turned on during the recount as an extra precaution to ensure every vote is counted and a voter’s intent is honored. This was explained to the campaigns involved, yet they chose to go to the masses and lie about voter fraud. They organized a protest over the vote count entirely based on lies. Folks, these people are not honest brokers. How many times do we have to catch them lying or peddling false information before we turn them out to pasture? This is like watching Schiff run the Russian collusion hoax… but it’s Republicans this time perpetuating clear falsehoods. Wake up. This was all started by cult leader Joe Oltmann, and it’s literally wrecking people’s lives. Do your own research and think for yourselves if you are caught up in this. Ask questions of real experts, and question what you are told. The supposed leaders of this movement are con men who are using the masses to stroke their egos.

Another Republican, conservative Denver-area talk show host Jimmy Sengenberger of 710 KNUS radio, who wrote an article in 2021 about how Logic and Accuracy Tests work and who worked in elections on the Arapaho County Canvas Board, also breaks down Tina’s grift in great detail on his 7/30 radio show, pointing out how Tina raised far more for her recount in just a few days than she raised over her entire campaign for Secretary of State, and then spun the narrative that the recount is a failure. 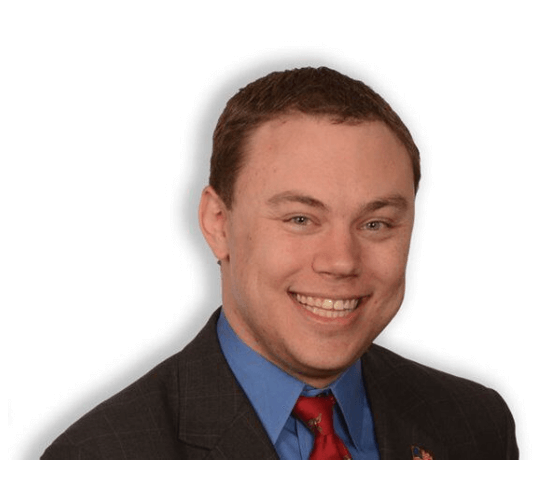 Jimmy Sengenberger, who has had a conservative political talk show on KNUS 710 radio in Denver every Saturday morning since 2013

In the second hour of his show today, starting at 22:34, Sengenberger explains exactly why Tina’s claim is deceptive, why the recount is working properly, why Tina’s statements that there are outrageous errors in the Logic and Accuracy Test are bunk, why the recount itself is a pointless waste of people’s money, and how she simply spun the issue as a way to con a tremendous amount of money from people who are sympathetic to her cause for a recount she won’t even accept the results of.

Mesa County Commissioner Cody Davis asked Tina in January to do a hand recount of the 2020 election, and she refused

Sengenberger also plays a key audio clip that illustrates Tina’s disingenuousness in her claim that there was fraud in Mesa County’s 2020 election. The clip is of Mesa County Commissioner Cody Davis saying,

“In January I did approach Tina Peters and asked her to do a full audit and hand count of the 2020 election, and she refused. So the pendulum swings to the other side. I don’t really understand, but I did … I pushed her hard and even said we’d fund it, so to say that we haven’t tried to do this, we have. And I requested that of Tina at the beginning of the year because I wanted to prove that the 2020 election was true. So I did do that.”

Sengenberger interviewed Tina on his show twice before and says

“…and she had no explanation for why she didn’t do a hand recount when she had the chance to prove that something was up in 2020. And so now she’s raised $250-something thousand dollars to do this recount where she’s not even going to accept the results. But instead what she does is spin a narrative. … and they are claiming that there was a failure in the L&A Test yesterday…they’re claiming more than a 50% error rate revealed by the L&A test.”

Sengenberger has worked in elections and participated in a recount, and explains how recounts are done, and what people need to know to understand how it works. He says the system in El Paso County is doing exactly what it’s set up to do and is functioning correctly. He adds,

“To me, it is disgusting when you con hundreds of thousands of dollars off of people for nothing except a vanity play, or to create some sort of baseless narrative and keep generating it. That’s unethical. And it’s wrong. And it proves all the more reason why Tina Peters does not belong as Secretary of State…”

In his podcast today, Sengenberger explains why Tina either doesn’t understand how elections systems work or she does understand, and is intentionally manipulating people.

You’ll want to hear this. It’s about 15 minutes long, but worth every minute.

The relevant segment of the show starts at 22:34

Leave a Reply to One Fly Cancel reply