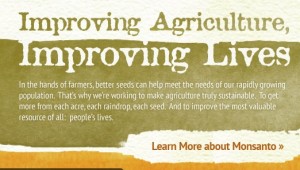 Tobacco farmers in Argentina filed a lawsuit (pdf) against Monsanto and Philip Morris for requiring them to use herbicides and pesticides that caused a high rate of severe birth defects among their children. The farmers charge that Philip Morris and the subsidiary companies that bought their crops required the farmers to stop growing their native tobacco grow a new kind of tobacco instead that Philip Morris uses in its cigarette formulation for the North and South American markets. The new tobacco they had to grow required more pesticides, and the farmers had to use excessive amounts of Monsanto’s glyphosate-based herbicide Roundup — but the defendant companies did not warn them about the dangers of the herbicide, or provide the farmers with safety information about the chemical or any protective gear to wear when applying it. Monsanto’s pesticides contaminated nearby food crops that were grown for family consumption, and the farmers’ water wells. Leftover pesticides were disposed of improperly and contaminated local waterways. The infant plaintiffs were born with a huge number of severe birth defects including cerebral palsy, psychomotor retardation, chronic encephalopathy, epilepsy, spina bifida, strabismus (a condition in which the eyes are not properly aligned with each other), cerebellar malformation, diaphragmatic hernia, hydrocephalus, congenital heart defects, blindness, intellectual disabilities and physical deformities like fused toes and missing fingers. The defendants claim that Monsanto, Philip Morris and Philip Morris’ Argentine tobacco subsidiaries were “motivated by a desire for unwarranted economic gain and profit,” and so simply ignored the health risks of the pesticides. The complaint was filed April 5, 2012 in the U.S. state of Delaware.