“We exhort all officials and stewards of the public good, including those here tonight, to be unified in your endeavors for honesty, truth and wisdom.

“We beseech all those present to shun primitive hatreds and superstition, bigotry, prejudice and atavism and instead seek equality in justice and thereby safeguard all worldviews and treat them equally and with respect.”

“We counsel this entire community to allow the light of truth to shine unobstructed on all matters, and to let not one coveted assumption be spared examination, to let not one archaic belief be spared disgrace, and thus leave no room for ignorance and assumption.

Modern Satanism encourages compassion and empathy towards all (including animals), supports the pursuit of justice, opposes to efforts to control others’ bodies, promotes freedom of speech including the freedom to offend, and supports establishing belief systems based on scientific reason and discovery. 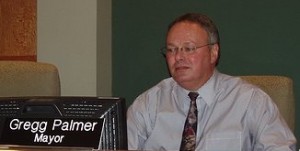 Former Grand Junction Mayor Gregg Palmer served on the G.J. Regional Airport Board during the time the FBI was investigating the Airport for fraud, and  had a failed run for Mesa County Commissioner in 2014.

In a letter to the editor of the Daily Sentinel printed on August 2, former City Councilman Gregg Palmer and owner of Brown’s Shoe Fit on Main Street, described non-Christians giving invocations as “unsavory.” But his intolerance of diversity did not deter anyone, and may even punctuate how far Grand Junction has evolved culturally in the last few years.

Mr. Palmer has been out of office for many years now, during which time the City of Grand Junction has become far more diverse. The current city council seems to be distinctly more open-minded and welcoming, and less opposed to different kinds of citizens saying the invocation at their meetings. After all, the City itself put in place an invocation policy that welcomes all comers without regard to ethnicity, religion or any other characteristics. That’s a wonderful thing. The Satanic invocation  raised awareness of the City’s broad invocation policy and embrace of diversity, and Rastafarians to Pastafarians and beyond are now applying for an opportunity to say the invocation. Thanks to this, City Council can likely expect more interesting and exciting invocations at future public meetings, and that’s a terrific thing, especially if it gets more people watching and participating in the goings-on down at City Hall.