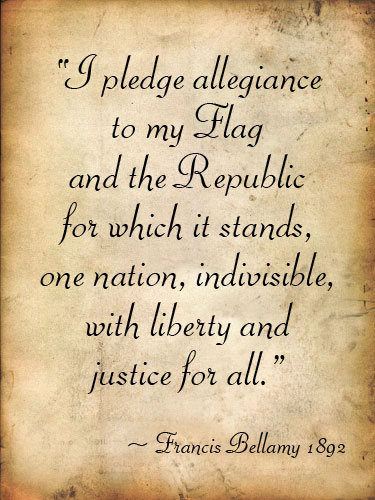 The text of the original Pledge of Allegiance, as it existed until 1953. In 1954, Congress added the words “under God” to it, effectively changing it from a purely patriotic statement into a religious statement.

San Francisco 49ers quarterback Colin Kaepernick’s recent refusal to stand during the playing of the national anthem has spurred debate over coerced and often perfunctory recitations of the Pledge of Allegiance.

In reaction to the September 2001 attacks on the World Trade Center, people started reciting the Pledge more frequently, on more occasions and in more venues than ever before. Many U.S. public schools starting requiring students to recite the Pledge of Allegiance daily. Mesa County’s District 51’s student handbook (pdf, at page 35) says students get an “opportunity” and have the “right” to say the pledge, but it never expressly says in a neutral manner that students also have a legal right not to say it. Rather, the manual practically sneers at students who choose not to say the pledge by using language that infers such students are likely to be disruptive and disrespectful in doing so:

By contrast, even Delta County School District 50J’s policy (pdf) is clearer, simpler, less judgmental and more even-handed in its language about reciting the Pledge:

“Any person not wishing to participate in the recitation of the Pledge for any reason shall be exempt and need not participate.”

The Pledge of Allegiance originally was purely a patriotic oath. From 1923 to 1953 the Pledge read as follows:

“I pledge allegiance to the Flag of the United States of America and to the Republic for which it stands, one nation, indivisible, with liberty and justice for all.”

But in 1954, Congress turned the Pledge into a religious oath by officially adding the words “under God.” Legislators inserted the clause at the urging of religious groups, primarily the Knights of Columbus, a Catholic men’s club. (To thjs day, the Knights of Columbus only admits men over the age of 18 who are practicing Catholics.) Inserting the new wording was intended as a way to repudiate the “godlessness” of Communism during the Cold War.

Many students are unaware that their grandparents said a different, non-religious pledge.

But the U.S. has a secular government, meaning American government at all levels is precluded by law from imposing religion or religious practices upon its citizens, so no American can be compelled to say a religious oath against his or her will.

Western slope public school students, especially District 51 students and those who are non-religious, need to know there is no requirement whatsoever that they recite the Pledge of Allegiance every day.

In addition, no student can be singled out, told they must stand and put their hand over their heart or otherwise be rebuked or penalized for not saying the pledge. It is also against the law for students who participate in or lead the pledge to be rewarded or favored in any way over students who don’t participate. 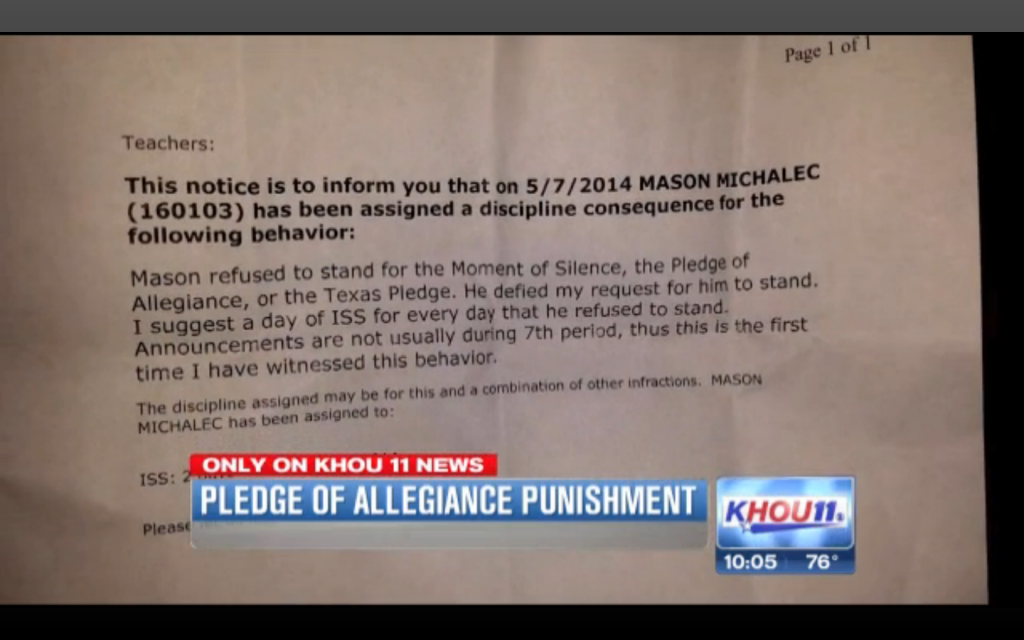 A Texas student was punished for not saying the Pledge

Schools need to take extra steps to fully inform students of their civil rights in regard to the daily recitation of the Pledge, and should not pressure, make judgements about or stigmatize students who don’t want to participate. It would be easy for students to be misled by a school district-mandated, crowd-driven activity into believing they have no choice in whether to participate in this particular activity. Any time a public school tells its students it’s time to stand for the pledge, they should also include a verbal disclaimer telling students that America is a free country, and no student must stand or participate in the ritual if they don’t want to.

But do District 51 schools do this? Do any western slope public schools?

So if you are a student and your rights are violated in any way in regard to saying the Pledge, don’t be afraid to make a fuss over it. The law is definitely on your side.

5 comments for “Don’t Be Fooled: Saying the Pledge of Allegiance, Now a Religious Oath, is Always Optional”