It was clear back in 2018 when she was elected that Tina Peters was unqualified to be Mesa County Clerk and Recorder. She had had zero experience in government or in the Clerk’s office, had never worked in public administration or worked on an election in any capacity.

At the time, the qualifications between the two candidates for County Clerk couldn’t have been more stark:

Tina was a former flight attendant, had dabbled in real estate, worked for a Hollywood talent agency, had done multi-level marketing for health magnet purveyor Nikken and had a degree from the now-defunct Clayton College of Natural Health, an online school that was shut down in 2010 after its students brought a class action lawsuit against it for breach of fiduciary duty 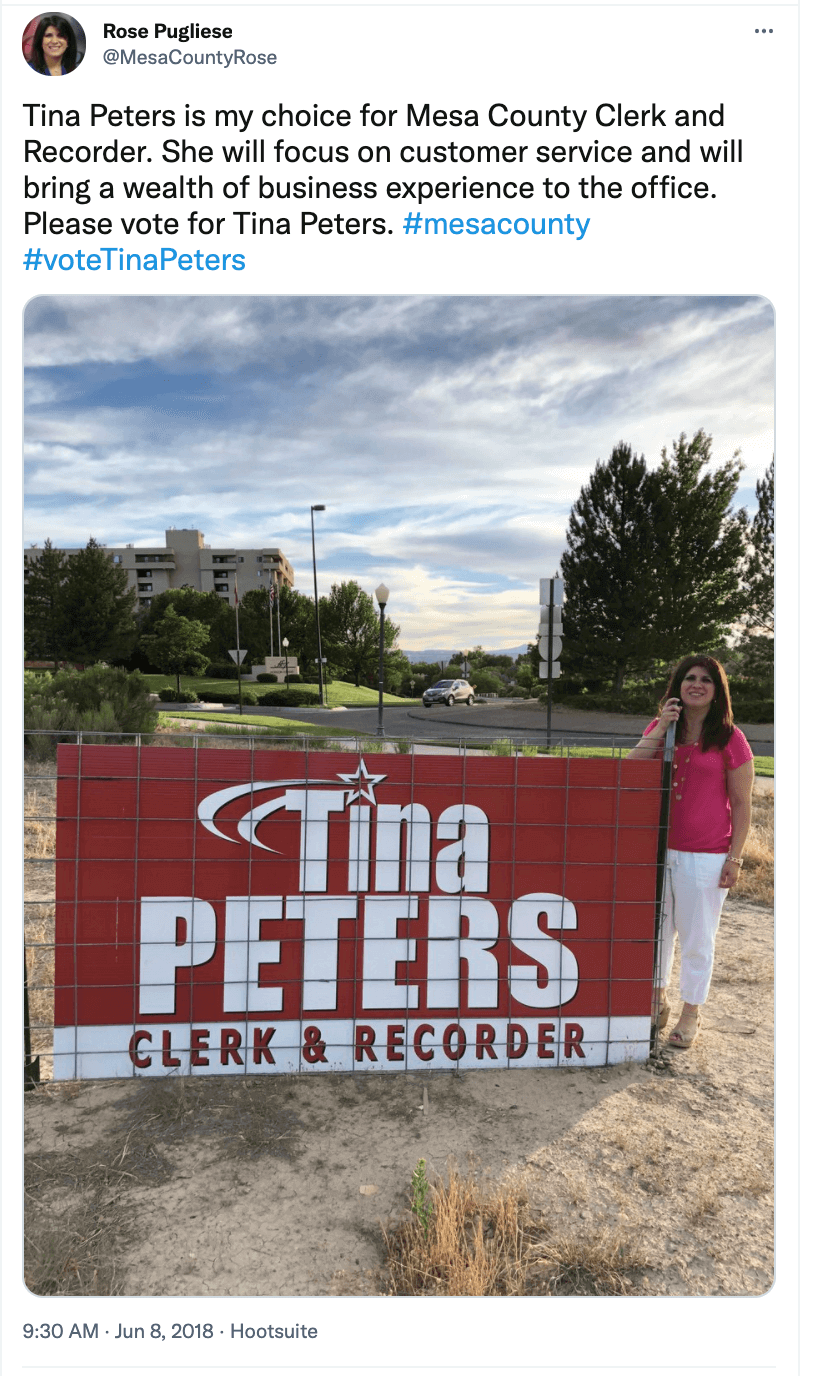 By contrast, her opponent, Bobbie Gross, had already worked in the Mesa County Clerk and Recorder’s office for over 10 years. Gross was manager of the Motor Vehicle Department, overseeing 19 of 30 Clerk and Recorder employees. She had co-directed the 2016 presidential elections for Mesa County, was already a Certified Elections Official and was about to become a Certified National Elections Administrator. Gross had in-depth familiarity with all of the functions of the office, and with Colorado’s rules and regulations that pertain to County Clerks. She was a long-time, seasoned, experienced employee of the Clerk and Recorder’s office, well-versed in all the functions of the Clerk’s office and ready to move up to the head position.

Yet for some reason, the Mesa County GOP persisted in backing the inexperienced and unqualified Tina all the way. Mesa County GOP Party Chair Kevin McCarney defended Tina even after she forgot to collect 574 ballots in a ballot box from the 2019 election that were discovered in 2020. McCarney even defended Tina after she refused to count those hundreds of legitimately-cast ballots and refused to ask a judge to include them in the final tally for the 2019 election. Instead of being as deeply concerned about election integrity as he seems to be now, McCarney minimized Tina’s loss of the 574 ballots, calling the matter “trivial” and “unfortunate” (pdf). McCarney and the Mesa County GOP kept defending Tina throughout the bipartisan, citizen-led effort in 2020 to recall her —  during the pandemic, no less — and kept defending her even after she had cost county taxpayers hundreds of thousands of dollars by compromising the County’s voting equipment and letting the passwords get put on the internet in a pursuit of some crazy, imaginary election fraud that was many times over proven not to exist.

Now, after Tina’s increasingly crazy election-denier escapades have cost Mesa County taxpayers $1.3 million (and the tab is still growing), and after Tina was charged with multiple felonies related to election tampering, and after she lost her quixotic bid to run for Secretary of State, in a June 29 interview on Colorado Springs TV station KRDO, McCarney finally started trying to distance himself from Tina.

In a post-election interview, McCarney told KRDO he is “ready for the GOP to move forward instead of focusing on election accusations,” adding that,

“I was a huge supporter of Miss Peters early on, but she made it pretty clear that she was not about just elections, she was about herself,” said McCarney. “And I think when you have a candidate that’s about herself as opposed to principle, you’re going to have problems with that.”

Wow, not so fast, Mr. McCarney.

That’s a massive understatement, and you can’t get away with just leaving it there.

Mesa County citizens have endured unbelievable expense, embarrassment and suffering on account of Tina, and you and your dolt of a party are largely to blame.

Level-headed Mesa County citizens could see years ago that Tina wasn’t concerned with faithfully discharging her duties as County Clerk and Recorder. We saw then she was consumed only with herself. Now Tina’s focus is on boosting her profile as a national election-denier celebrity, on continuing to suck up her $93k/year, taxpayer-funded salary without lifting a finger to do any Clerk duties required by her office. She’s concerned with how she can continue to fleece her supporters out of money. She’s concerned with flying around in private jets, and giving talks around the country to idiots who continue to believe her lies. She concerned with how many hundreds of thousands of dollars she can get for her “legal defense fund” in violation of Article 29, Colorado’s anti-corruption law, that limits how much elected officials can make on the side to $65. She’s concerned with buddying up to her increasingly shrill, unhinged sugar daddy, “My Pillow Guy” Mike Lindell. She’s concerned with how to keep hobnobbing with the rich and famous at Mar-A-Lago, and with figuring out ways she can be seen with Donald Trump and how she can continue to spew her nonsense about stolen elections and continue to grift off her duped supporters.

The Mesa County GOP can’t just simply now walk away, say “Never mind” and expect us to forget and move on.

McCarney and the Mesa County GOP owe the entire county a huge apology for refusing to admit the obvious truth about Tina from the get-go, for being in complete denial about her utter incompetence, for defending and trivializing her loss of 574 legitimately-cast ballots, for forcing Mesa County citizens to pay — and keep paying — through the nose for her loony antics, while the GOP continued to justify and defend her behavior and blindly support her as she became more and more unhinged. The GOP needs to apologize to the local electorate for failing to timely advocate for Tina to step down from her elected office and let someone competent serve as Acting County Clerk until we can elect a new Clerk. The Mesa County Republican Party needs to apologize, too, for spreading hoaxes and misinformation, for itself promoting the lie of a stolen election, for defending Tina ad nauseum despite the way she lies, uses and slanders people, deflects responsibility for her illegal behavior, and continuously blames her misdeeds on others.

All of the citizens of Mesa county deserve a sincere, heartfelt apology from the Mesa County GOP for being a horrible, blind idiot of a party, for misleading local Republicans who bought into their nonsense and for getting all of us into this terrible mess with Tina. And McCarney and the GOP need to tell all of us why in the world anyone should ever trust your party for anything in the future.

34 comments for “The Mesa County GOP needs to apologize for creating, aiding and abetting the Tina Peters debacle”