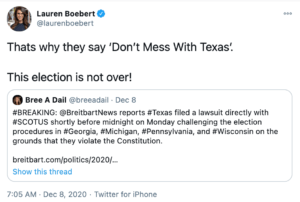 Boebert thinks the election isn’t over, and she is smarter than doctors

Trump lost 59 court cases challenging the legitimacy of the general election and demanded and got multiple ballot recounts that affirmed Biden’s win. The Electoral College declared Joe Biden the winner on 12/14 by a margin of 306 to 232, and yet Lauren Boebert, our newly-elected Republican House Representative who didn’t graduate from high school and just recently got a G.E.D., is promoting “the election’s not over” lie.

Boebert is also throwing shade on Dr. Anthony Fauci, the Director of the National Institute of Allergy and Infectious Diseases for the last 36 years, who guided the country through the SARS, HIV/AIDS, Avian Flu, Swine Flu, Zika and Ebola epidemics, and who has advised six U.S. presidents on domestic and global public health issues. Fauci’s expertise has helped save countless lives and stopped the spread of HIV globally. But Republicans see people who have expertise, experience, knowledge and education as enemies, to the point where many local Republicans likely believe Lauren Boebert really is the one person who knows best how to handle the pandemic.

Showing the same over-the-top hubris as Boebert, Mesa County Commissioner-elect Janet Rowland has been publicly dissuading people from wearing masks, downplaying the death and disability caused by Covid-19, and has been a prolific spreader of Q-Anon-linked propaganda and fake science on her candidate facebook page.

Like Boebert, Rowland has no education, expertise or background in medicine, epidemiology, virology, public health, or any other area that would remotely qualify her to make public health pronouncements on how to handle a pandemic involving a highly communicable, deadly disease. 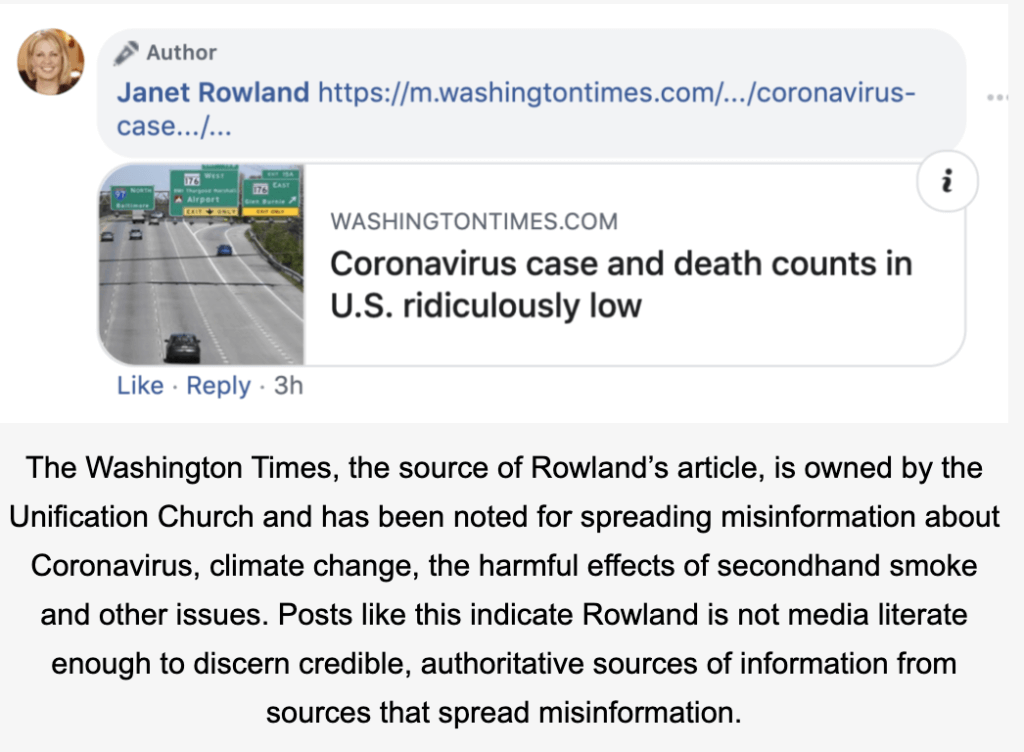 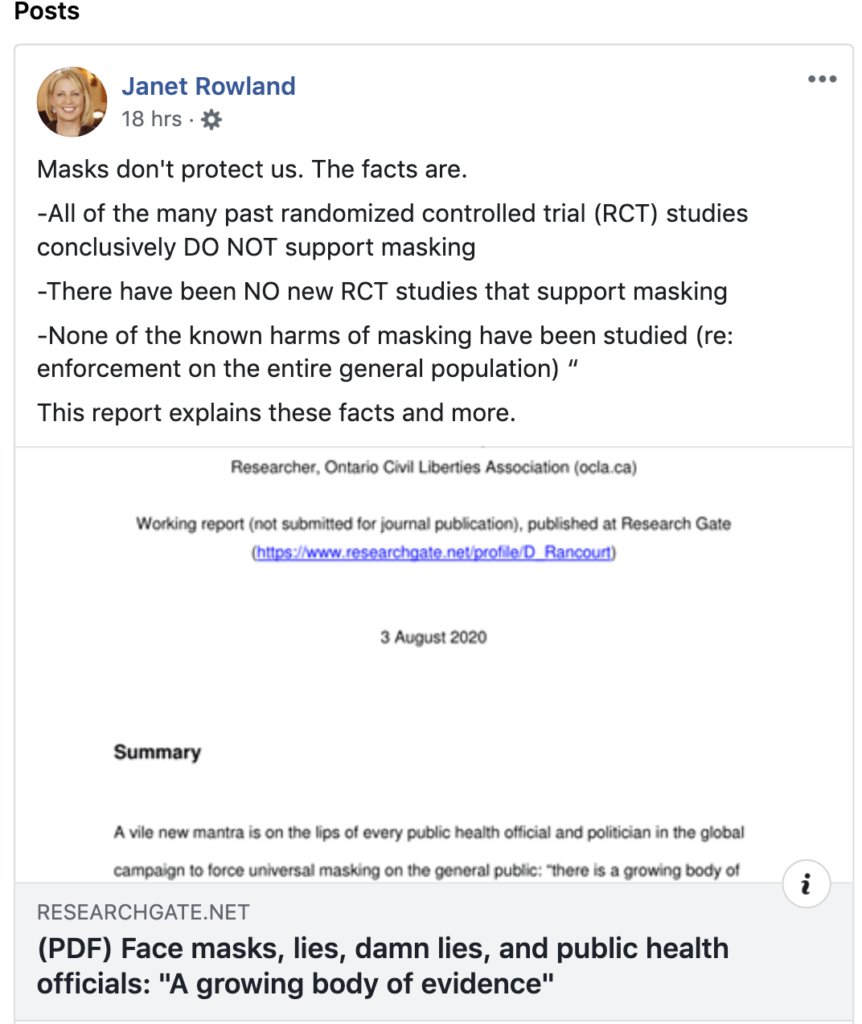 Ray Scott, our anti-science, climate change-denying Colorado state senator also pushed Trump’s lie of massive fraud in the November election when he re-tweeted a post by Michelle Malkin with the #StopTheSteal hashtag. The post pointed to an article about a truck carrying as many as 280,000 ballots that supposedly simply disappeared.

Scott retweeted the allegation without providing his Twitter followers with the finding that a thorough investigation of the matter revealed that nothing unusual had actually happened, and that no fraud or malfeasance was found to have been committed. 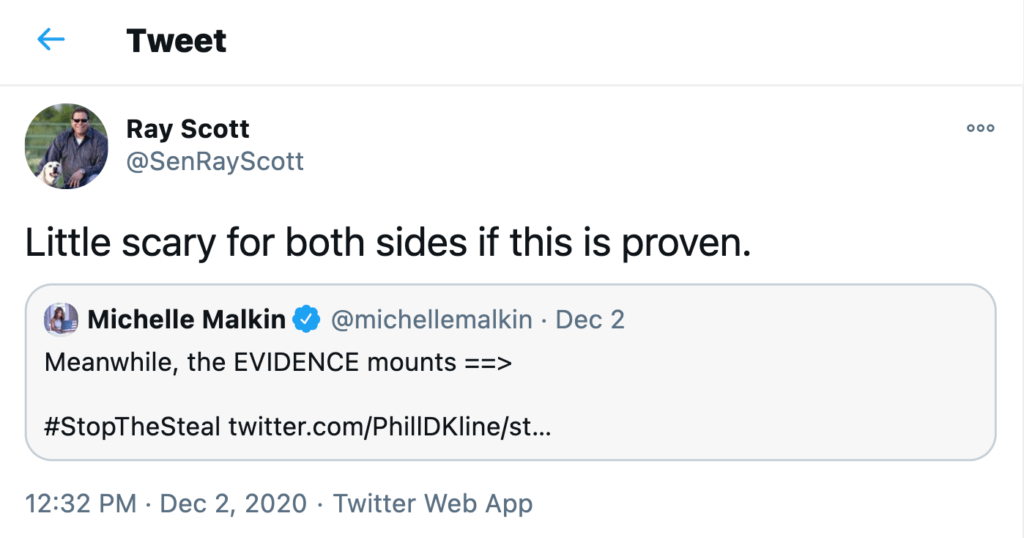 Ray Scott retweets a #StopTheSteal post from Michelle Malkin that inferred hundreds of thousands of ballots had mysteriously disappeared.

While Democrats who accept reality were elected at the federal level, we are stuck with these nutcase Republican elected officials in Mesa County for the next few years. But that’s the way it’s been for a very long time. It continues a long-standing tradition of Mesa County voters electing unfit candidates, including people who commit assault, trespassers, shoplifters, inept candidate, felony embezzlers, drunk drivers, plagiarists (several of them), and run-of-the-mill awful candidates without big egos and a lack of ethics.

So nothing is new here.

When we start getting enough people moving here from somewhere else, though, maybe one day we’ll have competitive local elections in Mesa County that will result in the election of a few adept, intelligent, educated candidates with no criminal records and who deal in reality, for a change.

And it would be a BIG change.